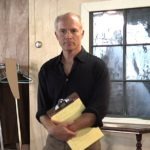 A frustrated acting teacher struggles to spark passion in his inexperienced students.

New England Connection: Richard Waterhouse and Dan Butler make their home in Newbury, Vermont. Sharry Underwood, the 'class monitor' in the film has lived in Vermont and been a member of the arts community there for over 50 years. The entire cast and crew live and work in Vermont and New Hampshire, except for their AD who is from Maine.

Director(s) Bio:: Richard Waterhouse has acted professionally as a member of SAG, AEA and AFTRA for 20 years. He has studied with teachers Roy London, Ivanna Chubbuck, Cameron Thor and James Price. Richard taught for five years at the Cameron Thor studio in Los Angeles, leaving to open his own studio in 2003. He has directed several short films and theater productions before directing his first feature film, Young, Single and Angry, now in international release. He has appeared in productions of Shenandoah, Too Many Girls, Oliver Twisted and most recently in I Hate Hamlet at Northern Stage. Richard is featured in the independent feature film Karl Rove, I Love You and Moonlight and Mistletoe for the Hallmark Channel.