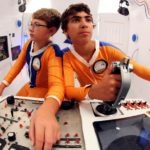 Captain Eric Summers and Ambassador to Alien Life Forms Alex Tucker-Greene are the crew of Le Blue Stella, the most amazing vessel to drift above the earth’s atmosphere since the Apollo missions. What seems to be a simple adventure on the surface shows it has a deeper and more heartfelt connection to the real world. Above all, this is about their friendship.

Director(s) Bio:: Peter is a writer, director, & storyteller from Pittsburgh, PA. He runs a summer film camp (petersfilmcamp.com), writes & illustrates children's books, and is a firm believer in the power of hot glue and papier mache. His newest film, The Whistler, will be released later this year.
Peter's tells adventures of friendship, imagination, love, & bravery. 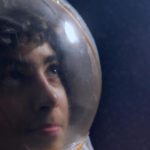