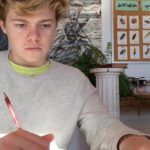 A boy receives alien parts to modify is body.

New England Connection: Josh has lived in Maine for 47 years.

Director(s) Bio:: Josh Outerbridge, born in NYC in 1967 moved to Maine in 1973. Working through different art mediums( ceramic, oil painting) Josh arrived at film where he worked on film and television as art director and other. With marriage and children, a new life in mid-coast Maine emerged, Josh moved into writing and has currently written over a dozen screen plays and four books. These projects he is trying to bring to life. In the meantime he makes short films and earns his money as a general contractor.