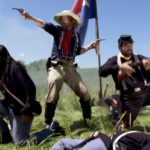 Bighorn is a 15-minute, supernatural historical fantasy based on a true fact: General Custer’s bandmaster, Felix Vinatieri — an Italian immigrant and the great-great-grandfather of New England Patriots’ Super Bowl-winning kicker Adam Vinatieri — was ordered to stay behind at the 7th Cavalry’s Powder River camp and missed the Battle of the Little Bighorn where Custer and his entire regiment were annihilated. The Twilight Zone-ish tale takes place in 2002 — when the Patriots won their first Super Bowl on Adam Vinatieri’s last-second, 48-yard kick — and in 1876. Nathaniel Philbrick, Pulitzer Prize-nominated author of the New York Times Bestseller The Last Stand, applauded Bighorn on his blog, calling it “an ingenious and demented intermingling of the Battle of the Little Bighorn with the New England Patriots” and telling his readers “you’ve got to see this film!”

New England Connection: Bighorn was shot entirely in New England. Writer/Director Alfred Thomas Catalfo and Producer Glenn Gardner live in New Hampshire, as do most of the cast and crew. The Boston-based story revolves around the New England Patriots' first Super Bowl win in 2002.

Director(s) Bio:: Alfred Thomas Catalfo is a screenwriter, director, producer, member of the Screen Actors Guild and attorney. He was a winner and/or finalist in 21 major screenwriting competitions in three years with three different feature scripts. In 2006, Catalfo wrote, produced and directed The Norman Rockwell Code -- a 35-minute, Web-based spoof of The Da Vinci Code that was featured on The Must List ("Ten Things We Love This Week") in Entertainment Weekly and had more than one million online hits in three months. The Library of Congress selected The Norman Rockwell Code for inclusion in its Film Collection which features works by American filmmakers chosen on the basis of their historical, cultural or aesthetic significance. 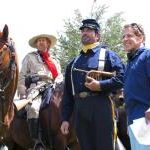