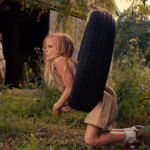 Set in 1974 rural New England, this enchanting story moves through the days of Cecily, a seven-year-old girl who, after the death of her baby sister, lives in a world with no music, no color, no laughter, no love—that is, until a magical imaginary friend shows up and joins Cecily on the quest to save her family from the grief that is destroying them. Jennifer Potts wrote the feature film script The Extraordinary World of Cecily Blinkstop in 2014, and this short version is based on the first 15 pages of the feature film script. This short film will be produced as a proof of concept to raise funding for the feature film.

New England Connection: Jennifer Potts lives in Worcester, MA. 80% of the cast and crew are from New England.

Director(s) Bio:: Jennifer Potts is an independent filmmaker, theatre director, educator, screenwriter, and playwright, as well as living proof that life does not need to slow down when you get to the middle. Potts graduated from Drew University in 1992 with a BA in Theatre Arts. After the youngest of her five children went to school, she co-founded and ran Cornerstone Performing Arts Center in Fitchburg, MA, where she oversaw a small non-equity theatre company and directed multiple productions every year.

In 2012, at age 41, she returned to school to study film/video production at Fitchburg State University, where she wrote and directed two short films and was awarded 2014 Film Student of the Year. In July 2016, I graduated from New Hampshire Institute of Art (NHIA) with a MFA in Writing for the Stage and Screen. While at NHIA I wrote three feature-length screenplays and one full-length play. My short film, Charlie & Poppy, was completed in 2015 and screened at 18 film festivals around the world and took home three "best of" awards. The Extraordinary World of Cecily Blinkstop was shot in 2017 as a proof of concept for a feature film. It screened at the 2018 Rhode Island International Film Festival where it took home first place in the Kids Eye Competition.

She currently teaches on the Humanities faculty at Regis College in Weston, MA, where she is also the Director of the Fine Arts Center.