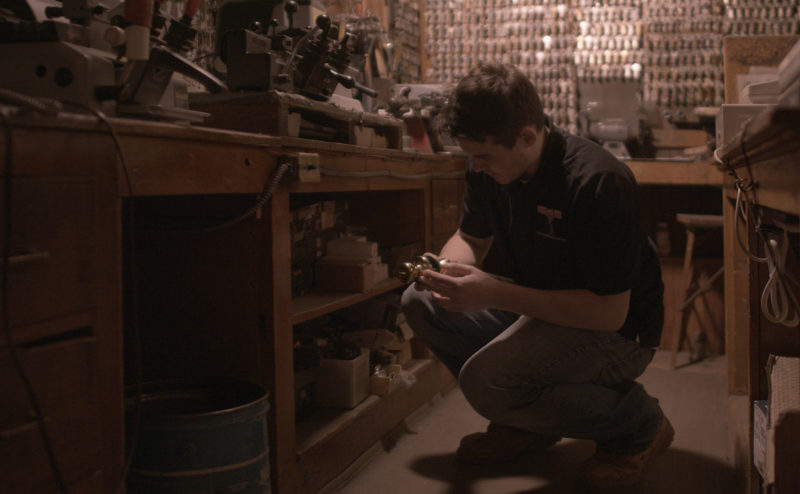 We caught up with filmmaker Jared Jorge about his filmmaking education and the hardware store that inspired The Inner Lock.

In The Inner Lock, A nervous woman visits a hardware store looking to purchase what she needs to change all the locks on her house. She is assisted by a young, unsuspecting clerk who follows his normal procedures despite his customer’s questionable behavior.

This film takes place at Durfee Hardware in Cranston, Rhode Island. Director Jared Jorge has worked in the store for more than a decade and has lived in New England for his entire life. We talked with Jorge about his journey to filmmaking and the key room that inspired his film.

Jared Jorge: I had an interest in making films during high school because I was a skateboarder. At this point it was purely recreational as my friends and I would film each other then I would edit the videos.

Years after high school, having seen how the industry had changed, I thought filmmaking was something I might want to pursue as a career. I enrolled in community college where some film classes were offered, and my interest was immediately piqued. This would lead to me transferring to the University of Rhode Island (URI) where I majored in Film Media. Then began years of studying the film making process both inside and outside of school.

Jorge: The inspiration for my film came from my place of work. I was trying to come up with a film idea based on things I knew I had access to, and I’ve worked at Durfee Hardware in Cranston for more than a decade. The store has been around since the 1930s, so I wanted to utilize this old-time space.

In particular, I wanted to use the key room, which I’ve always loved the aesthetic of with its many machines and hundreds of keys lining the walls. My script was born out of trying to create drama between a clerk and customer involving the processes of a key maker.

Jorge: The film has been screened at URI during the final screening for the Spring 2019 Advanced Narrative class. This screening was meaningful because the class was mostly seniors in their final semester. This film felt like the culmination of what I learned, and it was great to share that with my peers beside whom I had spent a long time working.

NewEnglandFilm.com: How did you find the cast and crew for the film?

Jorge: I found my cast for this film by posting casting calls here on NewEnglandFilm.com. I made this film outside of class during my final semester at URI. Therefore, I was able to get some other students whose films I had worked on to be a part of my crew. Also, I had a couple of friends who were interested in helping out as production assistants, one of whom worked at the store with me.

NewEnglandFilm.com: Any advice for other new filmmakers?

Jorge: The first thing I would stress is the importance of pre-production and planning. A set can quickly become a mess if there is no outline of what needs to happen and when. Also, as a first-time director on this film, I think I could have been better defined in my own head about exactly what I wanted to see… I would say really think through all of the details of your story, including what is going on with the characters when they’re off screen. Having a vision that is as refined as possible will help you get the most refined performance out of your actors.