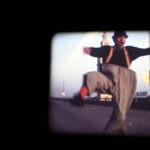 After his diagnosis with terminal cancer, eccentric filmmaker Sanjiban Sellew spent his final days at home with family and friends. Choosing to be as open with death as he was with life, he narrated on camera the extraordinary changes happening to him: “I feel myself becoming less of a human being daily, by the cancer in my brain that’s still chomping away at my electronics, my circuit boards.” After two and a half months, he died at home in rural Massachusetts. This short documentary takes place in the space and time between the end of one journey, and the beginning of another. With his twin brother John as our guide, we ferry Sanjiban’s body from home—a makeshift shrine in the dining room—to the furnace that will consume his earthly remains. “Sanjiban” is an intense, life-affirming story about the profoundly human experience of saying goodbye.

New England Connection: Director Ben Pender-Cudlip lives in Somerville, and went to school at Simon's Rock College in Great Barrington.
The principal subject of this film, Sanjiban Sellew, was born, lived much of his life, and died in the Berkshires. His films screened in local and regional festivals, including the Berkshire International Film Festival.
The remainder of the crew lives in and around Boston.