Growing up in a religious cult, Jackie and Amelia, now in their late 30s, meet up once a year at Amelia’s mother’s grave to reconnect and talk about life. ‘Are we broken?’ they ask themselves, only to decide after a topless escapade through their old sect, that they are only bent. Bent is a short film about those life long friendships that thankfully keep us feeling normal.

This film is no longer available to watch online. 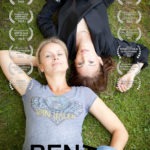