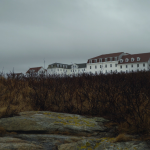 Located ten miles off the coast of mainland New England, the Oceanic Hotel is the grand, yet far-from-modern home to the thousands of guests who brave the choppy seas to visit during the warmer spring and summer months. Off-season, the hotel and the 43-acre Star Island on which it sits is home to Alexandra de Steiguer – its winter caretaker who braves the colder, darker months of inclement weather by embracing the solitude and finding inspiration, and life, in what would otherwise be considered the ‘bones’ of winter. 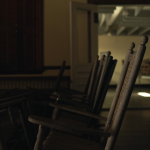