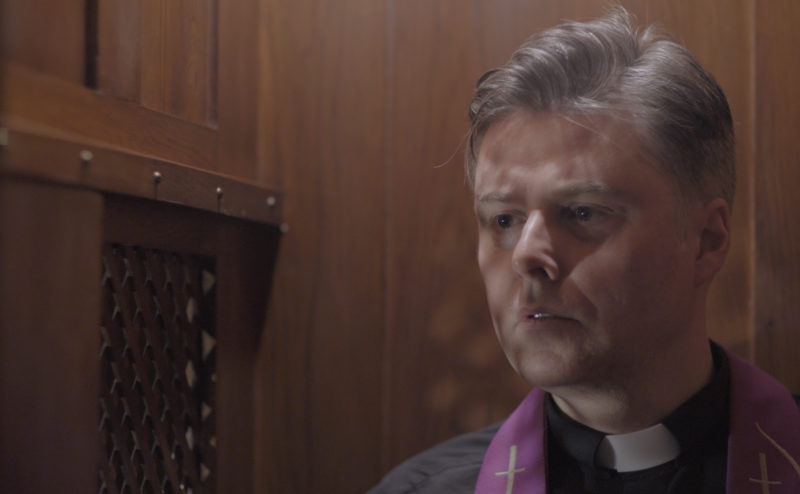 A priest grapples with his experiences of faith, the past, and his ride-sharing night job in an attempt to prevent a grieving penitent’s death

We spoke with filmmaker Stephen Bisaccia about the making of his film and his perspectives on creativity and failure.

In Acts of Contrition, a priest grapples with his experiences of faith, the past, and his ride-sharing night job in an attempt to prevent a grieving penitent’s death.

The film has screened at two New York film festivals to date, and filmmaker Stephen Bisaccia hopes to develop a feature-length version of the script. We caught up with Bisaccia about his film, his journey into filmmaking, and his advice for other new filmmakers.

NewEnglandFilm.com: When did you know you wanted to become a filmmaker? And how did you learn the craft?

Stephen Bisaccia: I made movies as a hobby in middle school and high school through a program at my local library. In those days, I was much more focused on sports than anything artistic, though.

But then when I started college as a journalism major, I started to really get into movies in a way I never had before. I largely have my older brother to thank for that: he loves movies in a way nobody else I know does, and has exposed me to a great variety of movies over the years. It was only a matter of time before I came around to it.

My sophomore year I switched my major to film, and since then, I’ve been off to the races.

Bisaccia: This was my undergraduate thesis film. Thesis groups were able to pick from scripts in a pool, but my group wanted to make something that came 100% from us and was more personal.

Our script changed a whole lot from its inception to now. At first the priest/Uber driver duality was much more its focus, which was probably rooted a lot in my experiences growing up in a Catholic family that took their faith very seriously and going to school in a low-income town where I made friends from very different backgrounds.

As the script evolved, and we realized due to budget constraints that we couldn’t do as much with the Uber as we’d like, the script found different sources of inspiration. With where it ended up, the film ended up being very much inspired by my mother passing away unexpectedly three years ago.

NewEnglandFilm.com: What has it been like showing this film to festival audiences?

Bisaccia: We’re still in the very early stages of our festival run. It’s been our group’s first experience watching something we’ve made on the big screen in front of strangers, which is such a scary, rewarding, humbling experience. I’m really excited to continue doing more of it if we can.

Screening our film in front of the school along with the other thesis films at the end of the semester is probably my favorite moment with an audience so far. There were so many emotions that night, after working so hard for a year and involving so many people in that room in the whole process, and showing it all to them for the first time — after remaining pretty cagey about it, as all the thesis films were — made for a pretty unforgettable experience.

Bisaccia: The crew was comprised of undergraduate film students and alumni.

We went into NYC to cast for our two lead roles, and aside from that, did a lot of the casting online. We actually ended up casting about a quarter of the roles to people I knew locally, too, because of its logistical ease. We shot the majority of the film in my hometown of Derby, CT.

A story worth sharing: Our initial actor for the second lead role was getting cold feet as production neared, and so we mutually decided to split ties. With only days before principal photography began, we brought on a friend of mine who’s been dying to make his return to the screen, Kevin Miller, to fill the role. He had laryngitis the week of production and still powered through it, never losing his endearing, kind presence on set along the way. I feel very indebted to him for the work he put into the film, especially on such short notice.

Bisaccia: My co-writer and I have bigger ideas for Acts of Contrition, and are currently developing a feature-length script that includes more Uber adventures.

I also had this idea for a short film about a chef preparing the final meal for a guy on death row that I really want to start developing. My friend also has a pilot script that we’re excited for about a woman that gets cold feet and runs away in her wedding dress to a town called Intercourse, PA (it’s a real place — look it up).

The real challenge right now is finding the funds and the equipment to continue making things when I don’t have access to my school’s equipment anymore and can’t really crowdfund a second time. Once I figure that stuff out, then I can really get the ball rolling.

I’m really into music — especially hip-hop — and am eager to break into the music video world, if I can.

But I’m really eager to find any creative work I can and expand my network, so if people are ever looking for someone — in camera, post, or even just as a PA on set — I’d be very excited to work!

NewEnglandFilm.com: What advice do you have for other filmmakers?

Bisaccia: I’m pretty new to the game, so I might not have great advice for everybody, especially people who are established and secure in their abilities. I can only speak to my own experience — as a young, inexperienced artist trying to find his way.

Making this movie really intimidated me at times as somebody who hasn’t really done a major production before, or worked with professional actors, or is too young and inexperienced to really have a refined artistic voice. But if you have the motivation to make the best possible movie you can, you’re going to rise to the occasion. Don’t let the fear of failing discourage you, because it’s that exact fear that’s going to propel you to creating something you never thought you were capable of. You will grow as a professional, an artist, a collaborator, and a person for trying something that part of you is convinced you’re incapable of.

But also, when you do fail, try not to be so dramatic about it. I know that I’ve treated failure like it’s life or death before, but the reality is you’re not getting the most out of your failure if you let it consume you. If you consume the failure, you will learn, get better, and grow.

You can watch Acts of Contrition now through October 14 as part of the 2019 Online New England Film Festival.