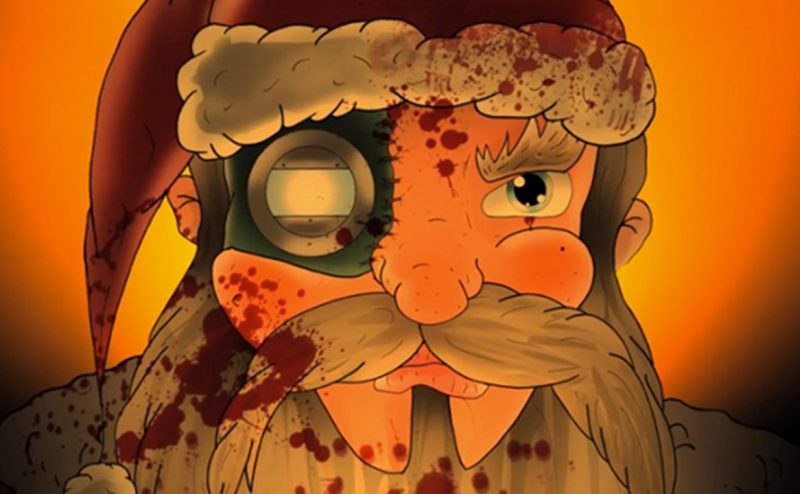 Director Michael Neel discusses his film Infinite Santa 8000, a twist on the treasured legend, and how the director’s cut, screening at the 2019 Boston Sci-Fi Film Festival became a version of the film he always imagined.

The premise of Director Michael Neel’s animated film Infinite Santa 8000 is classic horror with a twist: A thousand years ago, war, famine, and greed killed off the human race. Not much remains except mutants, scum, and robo-people. Everyone must kill to survive. Even Santa.

Neel will premiere his director’s cut of the film at the Boston Sci-Fi Festival on February 15, 2019 at 11 pm in the Somerville Theatre. Here, he talks with NewEnglandFilm.com Suzy Cosgrove on the effectiveness of a twist on the treasured legend and how the director’s cut became a version of the film he always imagined.

Suzy Cosgrove: So why don’t you start off with telling me a little about where you grew up and how you got started in film?

Michael Neel: I grew up in Watertown [Massachusetts], and I was involved with children’s theatre which was amazing because although I liked school, I also really liked the arts and it was a wonderful chance to be around production and be exposed to acting. I continued to be involved with theatre throughout high school and when I graduated I got accepted to Vassar for acting. As it turns out, as great as the program was, it just wasn’t for me. So I fell into film production which involved a lot of problem solving and creativity that theatre just didn’t have for me.

After college I moved to Boston where I really got involved in the film scene, which is very much present here. After being a PA for a couple of years I ended up filming for Hip Hop Nation which taught me to think on my feet. I took on all sorts of jobs as a freelancer—corporate videos, educational sessions, documentaries. After getting our film distributed, we decided the next thing we wanted to do was horror.

So, in 2009 we made a film called the Drive-In Horror Show and while we were waiting for it to get picked up for distribution, we started looking into doing a web series called Infinite Santa which ended up to be a 13-episode series. Between the artists that did effects for us for Drive-In Horror show, we had enough art to get started with the design.

Greg Ansin and I would take the designs into Photoshop and animate them marionette style, layering and then parenting all the layers together. We sort of just stumbled across it. We knew enough to figure it out and by the end of the web series we had developed pretty stable techniques for camera movements, lip syncs, battle scenes that we use in the film.

I’ve always been interested in killer Santa movies, there’s a level of sadism there that’s really interesting to me. Having him as a nice character really helps people connect to him.

SC: That makes sense, it gives it a human layer that people can relate to. If your audience feels alienated from him they’re not going to connect with him as well, there has to be someone you root for and connect with.

We decided to set the film 100 years in the future so that if people had seen the web series, they would have some pay off, and if they hadn’t, then we could establish the backstory reasonably quickly so you wouldn’t be confused.

SC: So was it just the two of you animating or did you hire on other animators?

Neel: No it was just the two of us actually which made for some restrictions when animating and there were two main scenes in the film that took months and months to do. It’s so crazy to see after it’s all done that only a few seconds of animation will take that long.

SC: With the length of the movie, I can’t even imagine the pipeline to get an hour and 35 mins of animation done!

Neel: Yes I know, on top of wanting to make everything very epic. At times it seemed so overwhelming knowing that we had 200 more shots just to get to the halfway mark.

SC: How were you keeping track of everything?

Neel: We would storyboard everything. With screen direction, which is something I’m always focused on because that’s so easy to screw up in animation but a big deal because if you board a character facing the wrong way, and then it gets designed that way, you’re in trouble. Especially when Santa is a cyborg with one eye.

SC: So what inspired the story of Infinite Santa?

Neel: Well I’m a huge horror fan, and Greg likes it. I really have just found the Christmas horror genre to be really fun. It’s at odds with the goodness of Christmas and presents the other side of the coin of all the cheery stuff, which I like too by the way. Over the holiday break it just sort of came to Greg and he really was the gatekeeper of all the small details that really made up the world. We worked with a few designers and developed a look and it just sort of came together. We had a small crew and with everyone working at the top of their game we made it happen.

SC: So will everyone be at the festival?

Neel:: We’re going to have a few people there definitely, it’ll be the first time we’ve seen it this big. We used a resolution that can be printed on film, and we did end up printing a trailer on film and it just looks amazing so I’m really excited. This version has never played in a theatre—I’m sure there are going to be details that I’ve never seen before because of the compression on the screens we’ve watched them on before.

Also I wanted to mention the reason we’re screening the director’s cut of the film. We had to cut a few scenes in order to make up for production time.

One was an action scene, one was an atmosphere scene, one was a character scene. And you didn’t need the character scene to understand the film and it was a lot of work, so we felt if we had to cut something it should be that. However, it removes some of the attachment and depth to the character. So after the theatrical version was released, we went ahead and animated those scenes. Once we did that it started to change the pace of the film which I feel like is overall better than the first version.

SC: So is there anything else coming up for you?

Neel: Yes! So Greg and I have actually optioned an autobiography written by Duane Bruce, the voice of Infinite Santa, about his time DJing in Boston in the late 80s/early 90s when music was changing and corporate radio was becoming a thing. And he really found himself in the right place at the right time with a freeform radio show that really celebrated music. So we’re working on a live action biopic script I’m really happy with so far.

I’ve also got a couple of short films in the works with an artist we’ve worked with before that will circulate around some festivals, as well as another horror feature. Just trying to keep busy! I don’t know if I would have seen myself here, 20 years after graduation, but I’m really happy with where I am.

Infinite Santa 8000 will be screening at the Boston Sci-Fi Festival on February 15, 2019 at 11 pm in the Somerville Theatre.