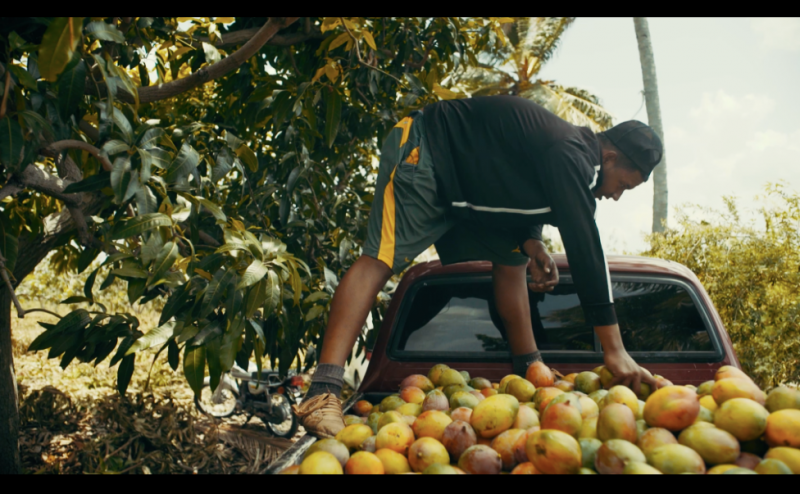 Follow Christopher through his daily routine in Baní as he balances his many responsibilities and trains to become a professional baseball player.

In Daymian Mejia’s short documentary The Field,  Mejia places us in Christopher’s daily routine in the capital city of Baní in the Dominican Republic. He dreams of becoming a baseball player, but before he even puts on a pair of cleats, he’s ran 2.5 miles, helped his aunt cook and deliver queepe to a local market and worked up a sweat harvesting fruit and burning excess vegetation on a property he maintains.

With just a little over 10% of the players currently in the MLB hailing from the Dominican Republic, his chances of making it aren’t much better than most other players born outside of the United States. Though baseball, according to Christopher is, “My life, my everything, my world,” Meji’s film shows that Christopher is one of many and none of his responsibilities are tabled while perusing his dream of becoming a professional baseball player.

Originally screened at the Salem Film Festival, The Field is now streaming through October 15 as part of the 2018 Online New England Film Festival. We connected with Daymian Mejia about what inspired this film, who Christopher is to him and the many unforseen challenges of making a short film like this.

Mejia: The moment i realized i wanted to be a filmmaker is when art inspired me. But everytime I attempted to create art with different mediums, it never seemed to communicate what I felt. There was a moment when directing my senior thesis music video with Raw Art Works in 2015 that i realized film speaks for me in a way that my words sometimes can’t.

Mejia: The inspiration from the film came from two things. Raw Art Works was rewarded a grant to make this film possible. The idea revolves around home. As a Americanized Dominican myself, the culture of the Dominican Republic seems foreign to me. The Field was a hope to tell the story of a Dominican teenager close to my age and what life is like for him. And to then bring that back to the states to show other Americanized Dominicans, as well as other cultures, what it’s like for Kristopher and what his dreams are.

Mejia: The process for finding the subject involved contacting family that was in Bank, DR. With the help of my father, we were able to contact Christopher (the main subject of the film) and schedule with him what day we would arrive and when we would be able to document the day in his life.

Mejia: I’m in pre-production for a short film i wrote titled Stitched. I hope to be shooting this film in late September/early October and have it completed by November to then submit to festivals. In addition to that, there are a handful of narrative driven music videos I’m hoping to get in production in September.  In august I’ll be working on a mural festival in Lynn, MA and then going to Haiti for a documentary with a production company as well.

Mejia: It’s important to take into consideration all of the technical production. With The Field, we did a fair amount of pre-production, but iIwish we were able to do more. With it being a documentary, we weren’t really sure what we were getting ourselves into. We had a rough idea what his day would be like but the entire day was draining. Maybe if we had communicated more we could have gotten a better understanding. It also created a lot of footage to edit. The first cut of the film was about 25 minutes long. Eventually, it was cut down to 10.

Mejia: As I’ve grown older, my work has begun to reflect more of who I am. With The Field, it’s slightly noticeable. But it was an early time in my journey as an artist. Hopefully, a year from now, I can return with a new film that could serve as an update for who I am as a person.