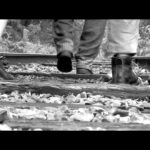 A poor family, having received tickets, must struggle through the gloomy, impoverished, sometimes surreal eastern European countryside to bring Grandma to the American Cinema.