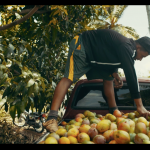 Passion, strength, and dedication in every field.

New England Connection: Daymian is a resident of Lynn, MA and made this film while attending Raw Art Work's Real to Reel filmschool in Lynn, MA.

Director(s) Bio:: Daymian Mejia is a 21-year-old filmmaker from Lynn, MA who will be attending Lesley University in the fall. He was fortunate enough to make this film through a grant awarded to Raw Art Works (Lynn, MA) by Adobe's Project 1324. In his spare time, Daymian likes to read, write, think, and take pictures.