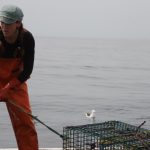 We follow one woman as she heads to sea on a fishing boat. In the eerie night or under the still bright sun, it’s not always clear where or when this is. It appears as a dream removed from the particulars of the woman’s circumstances and so in her melancholy narration she might not just be describing her own life alone, but also ours.

This film was made by possible thanks to the kind support from the Macdowell Colony.

New England Connection: My grandmother was from there and my film is shot there.

Director(s) Bio:: Chloe White is a documentary filmmaker and photographer based in London, with frequent travels around the world to collect stories and images. Her short award-winning films have screened internationally at festivals and have been shown on the Guardian, Nowness, BBC3 and Aeon. She is interested in character-led stories on diverse topics, from lobster fisherwomen to an atomic bomb survivor to elderly transgender people. She has filmed in over 25 different countries and recently cycled around the world on a tandem bicycle. 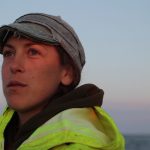