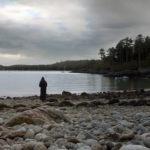 Three estranged siblings reunite in their ancestral home in Maine to attend to the unpleasant business of their mother’s passing. As they confront each other about their past, the future of their family hangs in the balance.

New England Connection: Roots in Water is all about New England, starting with Tony Award-winning playwright Richard Nelson, for whom New England is a continuing theme in his theater and film work, including the play New England currently in development as a feature film.
Shot in South Bristol, Maine over four typical Maine October days (that would include rain, sunshine and snow) the film also boasts of such New England stalwarts as cinematographer Alice Brooks (currently residing in Biddeford, Maine), Jeff Pucillo (who lived for 10 years in New Canaan, CT) and actress Sarah Kate Jackson was raised in New Salem, MA.

Director(s) Bio:: Domenica Cameron-Scorsese began her career in film as an actress at the age of 11. She started writing and directing plays and films at Wesleyan University receiving a B.A. with honors in film studies. Her short, A Little God, won The Torchlight Short Film Award. Her second film, Spanish Boots, premiered at Tribeca Film Festival in 2006. Domenica was a juror for the 2008 Santa Barbara Film Festival and Santa Fe Film Festival. She has guest lectured at the Idea Festival, Wesleyan University and Yale University. A product of Hollywood in the ‘70’s, she calls New York home.