Awaken the Dragon Together 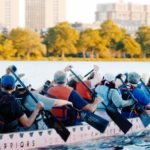 The tradition of dragon boat racing began over 2,000 years ago on the rivers of China. Today, dragon boat festivals and races are celebrated around the world. Over fifty million people now race in national and international competitions including a growing number of cancer survivors.

Awaken the Dragon Together is a mini documentary about Wellness Warriors, Massachusetts’ first dragon boat team for cancer survivors. It tells a story about a group of cancer survivor paddlers who have found an unconventional path to wellness through the ancient Chinese sport of dragon boating.

For them, the spirit of dragon boating is essential – a group of people work towards the same goal and support each other as families during the most difficult time of their lives. It’s a story beyond survival, shows the power of individuals’ inner strength built up by a team.

Director(s) Bio:: Shuyi Wang is an award-winning editor, producer and director specializing in non-fiction storytelling. She holds a Master’s Degree in Broadcast Journalism from Emerson College. Her recent work, “Awaken the Dragon Together”, a short-format documentary about Massachusetts’ first dragon boat team for cancer survivors, featured and screened as a finalist of HUA International Short Film festival in Los Angels, London and Tokyo in 2017 and the U.S. Embassy in Beijing in 2018. She served as a judge and MC of 2018 Arlington International Film Festival. Her previous work has been featured in NBC, New England Center for Investigative Reporting, edX, HKS Hauser Center for Nonprofit Organizations at Harvard University, MIT Digital Learning and CCTV-4.