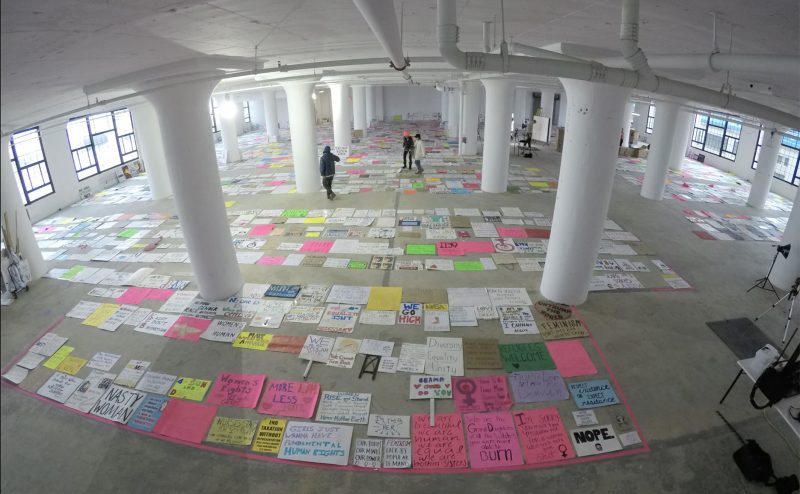 2018 Festival Interview: Art of The March

See the many signs brandished during the 2017 Women’s March in Boston and learn about the people dedicated to persevering them.

Emily Gordon, Ellie LaCourt, and Connor Lewis knew they had to raise awareness when they heard professors from Northeastern University collected over 6,000 protest signs from the 2017 Women’s March in Boston. Using the most compelling elements of documentary film, these three filmmakers worked together to highlight the signs featured in the protest and uplift the voices of the people doing the important archival work.

Originally screened at the Salem Film Festival, Art of The March is now streaming through October 15 as part of the 2018 Online New England Film Festival. We caught up with Emily Gordon, Ellie LaCourt, and Connor Lewis to learn more about how they all got into filmmaking and what’s next for the trio.

Gordon, LaCourt, Lewis: It’s a bit different for all three of us, but we all became more involved in film through school (where we met and made this film!) Each of us really found our own path — for Connor it was through a film club on campus that led him to pivot his major to focus more on film studies. For Emily, it began with a documentary she made in a school program abroad that made her passion for filmmaking grow. Ellie’s interest in filmmaking was sparked through a high school art program in California where she made her first animation. But for all of us, this project was a great reminder of the impact that a film can have on others!

Gordon, LaCourt, Lewis: We all attended Northeastern University where we learned about the Art of the March Archival Project, which started after the 2017 Women’s March in Boston when professors from Northeastern collected protest signs that were displayed around the Boston Commons. We had heard about the project and were immediately interested in creating a documentary to generate awareness. We’re living in such a chaotic and hazy political moment, so we were excited to be able to work on a film that highlighted the valuable collection and visualization of data (that the project provided) and also look at the greater function of protests in democracy.

NewEnglandFilm.com: Where has the film been shown (festivals, other screenings, etc.)?

Gordon, LaCourt, Lewis: Art of the March was at both Salem Film Fest and at Marblehead Festival of Arts. It was great to see other students’ work and get the opportunity to hear about their experiences and takeaways from their films. However, the most memorable moment was winning the award for Mass Reality Check Best Short at Salem Film Fest!

Gordon, LaCourt, Lewis: The three of us were the crew for the film. This project started in the classroom, where we met and discussed the idea before beginning production. Our main goal for casting the film was to include the Art of the March Archival Project contributors and collaborators which included Associate Professor of Communication Studies, Alessandra Renzi, and Professors of Art + Design, Dietmar Offenhuber and Nathan Felde. We also chose to include Dr. Sarah J. Jackson as another voice and perspective who really added to the conversation within the film by commenting on the significance of protest signs and how protests function in democracy.

Gordon, LaCourt, Lewis: Connor just wrapped up an experimental documentary from his study abroad experience in Ireland over the summer. The film was produced in a small town called Ballyvaughan in County Clare and captures the stories that veteran farmers have to tell about the land of Ireland, the changing landscape, and environmentalism in today’s age. Emily and Ellie do not have any current films in the mix, but are working in the field pursuing post-production and teaching film and animation at an arts camp.

Gordon, LaCourt, Lewis: To be honest, we are asking others for this same advice! Our film was produced using Northeastern University equipment and we had no funding otherwise. After winning the award at Salem Film Fest, we had the opportunity to speak with several people in the industry, which helped us realize the importance of applying for grants in order to raise money. Aside from fundraising, something that we personally took away from this film is that it is always great to collaborate! We all came with a different perspective on the living archival project, and we think that really influenced and informed the message and tone of the film.