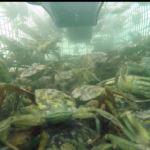 Director(s) Bio:: Nubar Alexanian is an acclaimed photojournalist who has worked for magazines in the U.S & Europe including Life Magazine, The New York Times Magazine, National Geographic and many others. He has six books in print, including JAZZ with Wynton Marsalis, Nonfiction Photographs with filmmaker Errol Morris and GLOUCESTER: When The Fish Came First. His production company, Walker Creek Media, LLC was created in 2006 and produces documentary films for non-profits including Recipe For Disaster: Green Crabs In The Great Marsh and Calling All Chefs.