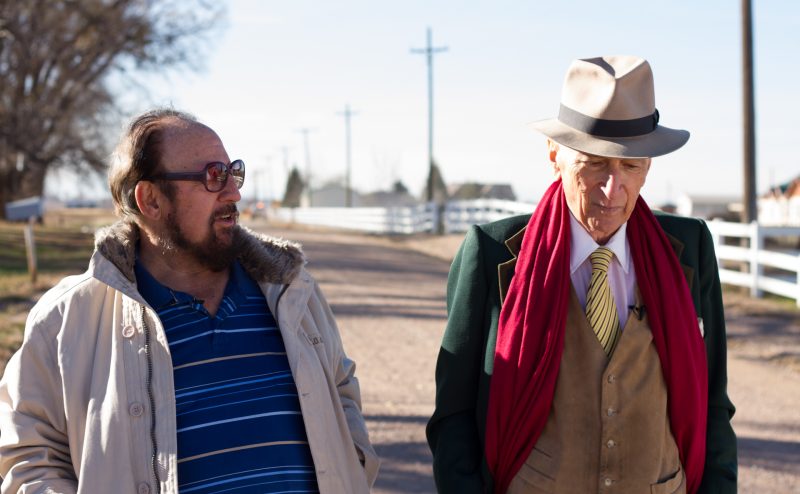 Gerald Foos and Gay Talese in the documentary Voyeur by Josh Koury and Myles Kane.

The Voyeur, Revealed: An Interview with Josh Koury and Myles Kane

Aja Zoecklein interviews co-directors Josh Koury and Myles Kane about the point of view in their documentary Voyeur, the relationship between their subjects, and what their subjects think of the film.

Voyeur, a new documentary co-directed by Josh Koury and Myles Kane launched on Netflix December 1, 2017. The film follows Gay Talese—the 84-year-old giant of modern journalism—as he reports one of the most controversial stories of his career: a portrait of a Colorado motel owner, Gerald Foos. For decades, Foos secretly watched his guests from the motel’s attic with the aid of an “observation platform” and specially designed ceiling vents. He kept detailed journals of his guests’ most private moments—from the mundane to the shocking—but most of all he sought out one thing: strangers having sex. The film documents Talese’s insatiable curiosity as he turns his gaze on a man accustomed to being the watcher, unearthing a tangle of ethical questions: What does a journalist owe to his subjects? How can a reporter trust a source who has made a career of deception? Who is really the voyeur?

Koury, an alumnus of the Vermont College of Fine Arts (VCFA) MFA in Film program, worked on this film as part of his thesis project while attending VCFA. Kane had already collaborated with Koury on several projects prior to this one, including Journey to Planet X, We Are Wizards, and We Will Live Again. The film premiered at the 55th New York Film Festival in October 2017, and now is available to stream on Netflix. Recently Aja Zoecklein spoke with Koury and Kane about the relationship between Foos and Talese, the documentary’s point of view, and what their subjects think of the film.

Aja Zoecklein: To borrow from a line in the film, “when you hold onto stories, things change.” You spent years of your lives with Talese and Foos and there really seemed to be a sense of friendship and camaraderie amongst you all—at one point, Foos says “I love you guys.” While there are multiple layers, the film is really about the relationship of these two very real humans, and to the juxtaposition of parallel lives in a specific point of time. How did the act of making this film change the story for you, or did it?

Josh Koury: Just generally in the way that Myles and I work as co-directors… my wife, Tricia Koury, the producer for the film, and I, we were spending a lot of time with Gerald. It’s sort of like what happened in the film, the more we get to know Gerald the more we started to understand him and empathize with him. Not forgive him for what he did, because I think that’s unforgivable, but just sort of understand him and understand the dynamic between him and Anita—who is, as far as I’m concerned, the most innocent, and likeable, and interesting.

Myles Kane: She’s like the star at every festival. I think she’s a conduit for the audience because she’s an innocent, and obviously the smallest personality in the room. I think some of her comments are surprising, but also sort of cathartic because she often says ultimately what’s actually going on and speaks truthfully, even if it’s just calling her husband a creep. She’s the human empathetic face that the audience needs.

You mentioned, working with these “two humans”—I think that’s a good way to put it—because that’s definitely how Josh and I always like to try to approach our characters in production, approaching them as “humans,” meaning they’re flawed, real people. In the edit we weighed them both equally. The nature of the format is you expect the subject to be portrayed as the victim and the journalist as the perpetrator, but we weighed them equally, and they’re both flawed and both likable in some ways. 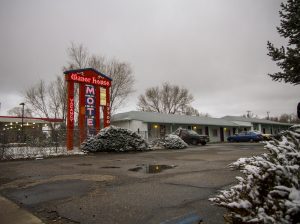 The Manor House, the Colorado motel, where Gerald Foos watched his guests.

AZ: Talese writes, “Most journalists are restless voyeurs who see the warts on the world, the imperfections in people and places.” The most compelling aspects while viewing this film were the times where you and your team are visibly present, either in reflective glimpses (Foos’s glasses, a window, a computer screen) or in that tense scene with Talese near the end of the film where we can hear you in dialogue with your subjects. Did you know early on that your role needed to be present in the film for the most impact, or did it evolve into necessity?

Koury: Our filmmaking style is very much to record and to capture as much as possible, in order to give us a lot of different options to layer the story or discover new angles in the story during our post-production. Very late in the process we discussed bringing ourselves in as a third layer of voyeurism, the audience then being the fourth layer. Once we started to realize that it was important to implicate ourselves here too, because we’re not blameless either.

Kane: Everything we’re hearing about Gay Talese’s career and his approach to journalism is a constant echo to what we do. It was just so clear that we’re all cut from the same cloth in terms of our desire to try to portray the truth, dramatize the truth, make these works out of nonfiction. If we’re going to make this sort of somewhat critical movie about a journalist, successes and flaws, we need to certainly tip our hat to the fact that we are maybe guilty of the same things.

AZ: I loved this idea of toying with perspective, who is looking in/who is looking out… you achieved this truncated POV visually by obstruction and looking through things, as well as with camera angles. Can you talk a little about manipulating visuals to convey greater meaning and metaphor?

Kane: Similarly to what I was talking about with the whole kind of journalism parallel, the camera here is obviously the ultimate voyeuristic tool. We are so aware of the camera…which for some reason seems to have more power than just the eyes. Stylistically there certainly was a choice in terms of shooting—in both their houses, they are both collectors, there is just so much stuff!—it presented itself naturally that you would constantly see them surrounded by many things, or be able to look at them through things. So, that was sort of a subtle way for us to make this commentary without using sound bites from other people or other mechanisms to convey the point.

AZ: How did this film change from your original story line, especially in light of the controversies regarding fact checking/Talese’s denouncement and subsequent redaction? Were there any “oh crap” moments that came up in your filming where you had to drastically shift course?

Koury: Well, Gay tried to the cancel the film a few times. It’s always complicated and it’s not uncommon for documentarians to have trials with their subjects. Gay’s a combustible figure and there were times when it was a long, long process. We tried to make our intentions clear throughout. Issues come up, you work to smooth them out.

Kane: I think it’s what makes the film so unique feeling because even though we got in with Gay, the fact was, when we started, there was zero guarantee that we’d ever meet the Voyeur. We shot for months before meeting him, and it was all Gay who figured out how to get us out there to meet him, and then during that time we could only access Gerald through Gay.

AZ: Now that the film is finished and out in the world, how do the two men feel about the the final product? Do they like the film?

Koury: Yeah, yeah, I think so… We obviously wanted to show both Gay and Gerald the film before our world premiere at the New York Film Festival. We rented a private cinema for Gay and Nan Talese, his wife, and some of his book publishers came, and it was definitely a tense, cold thing. At the end of the day, he clapped. You could tell that it was a tough watch for him. He consistently said that it’s a very honest film although he didn’t love a lot of what’s in it, it’s raw, but he respects it because he respects nonfiction. He said it was “tough, but fair.”

And similarly Gerald, we also rented a cinema…Anita was there, and his son. And they laughed a lot. [Laughs] For them, it was also similarly tough. Gerald said it was really tough to watch certain segments, but again, he only thought we did a good job.

AZ: Josh, you worked on this film while pursuing your MFA in Film at VCFA. How did being in the program at the time help shape the outcome of the final product and your trajectory as a filmmaker in general?

Koury: Myles and I had been making movies together for a long time, but I was interested in getting my MFA so that I could teach full time. The VCFA model attracted me because of the low residency component and its affordability. In the program, I was able to work with some amazing filmmakers that I had already known about and respected. I was familiar with their work and it was just really great to have the opportunity to sit down and bounce ideas and to workshop different cuts.

One of my faculty advisors, Jeremiah Zagar—who Myles and I had both known prior to my time at VCFA—when he first saw our 14 minute-fundraising trailer, he was really excited. He, and his colleague Jeremy Yaches, came on board as executive producers and were both instrumental in helping us creatively get the film to hit its potential. They also connected us with Impact Partners who became our main funders.

AZ: What’s next for you?

Koury: We don’t know! [Laughs] Everyone thinks we’re trying to hide ideas from them, but we’re not. We have a laundry list of things and some of them are good, some of them are OK, and some are maybe…who knows?

Myles Kane has directed Journey to Planet X, An Immortal Man, and We Will Live Again as well as editing We Are Wizards, Made In India, and Ask the Sexpert. He’s produced numerous short films and tv programs for The New Yorker and BBC.

Josh Koury’s director credits include Journey to Planet X, We Are Wizards, Standing by Yourself, An Immortal Man and We Will Live Again. As a film programmer, Koury’s tenure includes four years at the Hamptons International Film Festival and four seasons as the Director of Programming at the Brooklyn Underground Film Festival. He is currently a faculty member at the Pratt Institute and FIT.

Aja Zoecklein is a writer with a background in mixed-media art and photography. Her book of poetry, Insoluble Forgetting (Finishing Line Press), was published in 2013. She is a graduate of Vermont College of Fine Arts MFA in Writing program and is currently the Assistant Director of the MFA in Film program at VCFA.