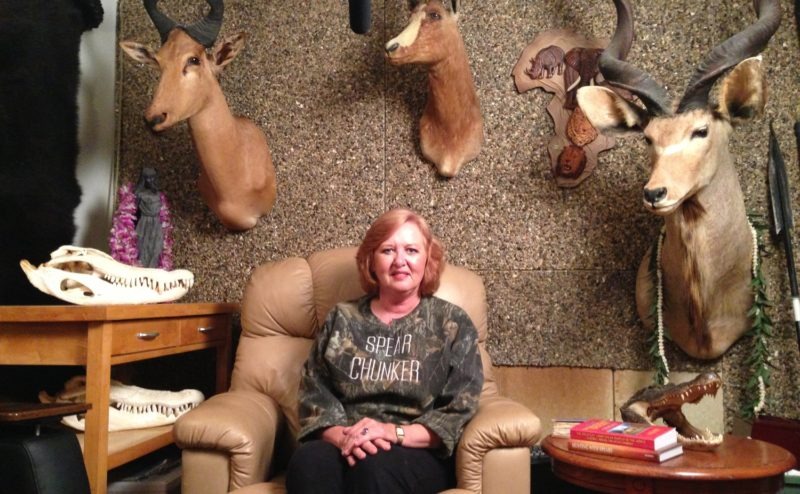 Adam Roffman talks about his film Spearhunter, a documentary made with Luke Poling about Gene Morris who (depending on your view) might be “a serial animal killer” or “the greatest spear hunter in modern history.”

During a visit to his newly retired father in Alabama, filmmaker and former coordinator of IFFBoston Adam Roffman stumbled upon the Spear Hunting Museum. The museum, created by and about Gene Morris who has claimed the title of the “greatest spear hunter in modern history,” became the inspiration for Roffman and Luke Poling’s short documentary Spearhunter.

The film has since screened nationwide, starting with a premiere at SXSW and most recently being chosen as a Vimeo Staff Pick and garnering numerous awards along the way. Here, Roffman talks with NewEnglandFilm.com about the film and offers his advice as a former festival programmer.

Zac Smith: What piqued your interest in film?

Adam Roffman: I have been interested in film and working in film since as far back as I can remember. My father took my brother and I to the movies at least once a week growing up, seeing films that were probably too mature for us at the time (Godfather Part II when I was three years old for example) and he also signed my brother and I up for a children’s filmmaking class when I was four-years-old. It’s really the only field I was ever interested in going into. So I went to film school, did a season-long internship on the TV show Bill Nye The Science Guy, and transitioned from there into film.

ZS: How had working as a film festival coordinator influenced your the content and style of your own films?

Roffman: I definitely learned over the years that I am drawn to bizarre, quirky stories and characters. And when I came across this particular story, I was very excited and surprised someone hadn’t already done a documentary on this.

ZS: Who are some of your influences?

Roffman: In terms of documentary directors, I would definitely say that Errol Morris is one, and many people have compared Spearhunter to his film, Vernon, Florida, and we actually hired his composer from the movie Tabloid, John Kusiak, to do the score for our film. Other than Errol, I would say it there are a lot of filmmakers whose work we showed at IFFBoston that influence what I like in a documentary and what I want to do to some degree; Jesse Moss, Ricki Stern and Annie Sundberg, Heidi Ewing and Rachel Grady, Ondi Timoner, Rodney Ascher, Sean Dunne, Steven Ascher and Jeanne Jordan, Jeff Malmberg, and so many more.

ZS: Where did you get the idea for Spearhunter?

Roffman: In 2012 my father, after living his entire life in Chicago and Washington D.C., very unexpectedly announced that he was going to retire to southern Alabama. After he had been down there for four or five months, he called me and said that he was lonely down there and asked if I would come visit.

This was my first time ever going to Alabama and on the way from the airport to his house at night, we passed the Spear Hunting Museum which has a mural of animal heads and a large man holding a spear painted on the outside of it. After we passed it I asked my father, “What the hell was that?” and he responded “Oh, some spear hunting museum.”

I said, “Oh, one of those. Okay, well, I’m not going to see that back in Boston so we are going there tomorrow.” We went back the next day and upon touring the museum I realized that this was a museum dedicated to and about the man who built it. I had never heard of someone building a museum dedicated to himself before and I thought that, plus some of the characters I met down there, would make for an entertaining and different documentary. I pitched the idea to my friend Luke Poling who I had worked with before and he loved the idea and joined me in directing the film.

ZS: How long did it take you to make Spearhunter including pre- and post-production?

Roffman: We spent about five to six weeks planning the trip and the shoot. Most of that time was spent researching and contacting the people we were interested in interviewing and discussing shots we wanted to try to get while down there. We planned the shoot out down to the hour and so we shot the whole film in four days (3 in Alabama, one in Texas). We then spent about six weeks in post, finding the right music, editing, color correction and sound mixing. This wasn’t anyone’s full time job so the prep and post work was done here and there around actual paying film work.

ZS: Can you describe your plans (if any) for your next project?

ZS: As both a filmmaker and past coordinator of a film festival, what advice would you give to people just starting out interested in making films?

Roffman: I would recommend a combination of things to someone just starting out. First I would try to educate myself as well as possible in documentaries, experimental films, foreign films, independent films, short films, just so that they can be inspired and understand the possibilities in film outside of what the mainstream audience is usually fed by Hollywood.

Going to film festivals and learning from the director Q&As afterwards would be helpful. I also highly recommend working as a Production Assistant for a few years to truly find out what it is like on a real film set.

It’s very different than a student film, and it will give them the opportunity to both learn what everyone does on a film set while also providing them with a ton of connections and people who will be able to offer advice and help them take the next step in their filmmaking.

The last piece of advice I would give is to not get discouraged in the first few years because it takes a lot of perseverance and sacrifice to make a steady living in filmmaking and it could be five, possibly ten years until they feel like they have a comfortable foothold in the industry and what they want to do.

For more information about the Spear Hunting Musuem, see www.spearhuntingmuseum.com.