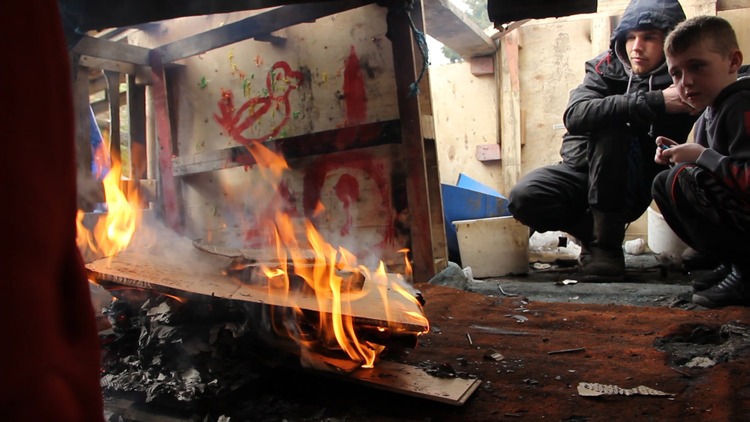 A still from The Land.

Filmmaker Erin Davis talks about the making of her short documentary The Land and the movement to embrace risky place.

You may have heard of the “free-range kids movement,” but you likely have never experienced an “adventure playground,” a place where children (without parents) can play with fire, hammers, saws, and more. Here, filmmaker Erin Davis talks about the inspiration and making of her short documentary The Land, and the conversation that it opens up about risky play.

Beginning in 2010, with a team of fellow Ohio natives at her side, Davis began her research on adventure (or risky) play – formulating the groundwork from which would eventually take shape of the short documentary, The Land.

The film will be shown at the Providence Children’s Museum on Thursday October 22 as part of a panel and conversation about ‘risky play,’ featuring filmmaker Erin Davis; Janice O’Donnell, Providence PlayCorps director; and NewEnglandFilm.com founder Michele Meek, who will screen a trailer of her short documentary/narrative hybrid film Imagine Kolle 37 (made with Lizzy Donius) about two girls who imagine their way from an American playground to a real Berlin adventure playground.

Instead of a traditional metal play structure, rooted heavily into the ground and welded together – a static environment for children to play around – “adventure playgrounds” foster the practice of using found objects to create original play patterns and create a world to play in.

Beginning in Post World War II Copenhagen, adventure playgrounds have fostered imagination and resourcefulness in young minds. Among the remnants of a war-torn city, children were forced to utilize what little they had, and create worlds within the war ravaged one they found themselves in.

Making its way from the Denmark to the United Kingdom and eventually the United States, the Play Movement in New York inspired filmmaker, Erin Davis, to explore what she describes as the “mindful evolution” of these innovative play patterns and the “play workers” who make it possible in her film The Land.

Supervised by play workers to ensure safety, children are provided with a space where they don’t feel beholden to rules and regulations of everyday life and play. The importance of the role of the play worker cannot be stressed enough. Providing a safe environment where the children can create their own stories and not be judged is essential to the movement.

“The environment gets a lot of attention, but the reason it works is because of the play workers,” Davis says. “They make the parents feel comfortable leaving their children and the children feel comfortable expressing themselves without fear of being told ‘no.'”

These play workers are dedicated to the very nuanced study of child’s play, deeply rooted in their work and committed to creating these havens for children.

Although the play movement is relatively new to the United States, having only about ten permanent structures, this movement has been a part of European life for decades. More often than not, parents are sending their children to the same playgrounds they had gone to as kids – of the hundreds that are currently in the United Kingdom alone.

Something that struck Davis was how uncomfortable she was at times watching the play unfold. She found herself wanting to warn the children of the dangers of doing this, or to be careful of that – but she could not. She was forced to watch the children work out their problems for themselves.

It is her hope that while audiences are viewing the film, they will experience the same emotions while watching the children play. The audience is forced to watch the arc of the play and accept the fact that no matter how uncomfortable it may make us adults, children are “empowered little creatures” as Davis says, and we don’t always know better. Instead of the delinquency we attribute to unregulated play, we have to look at is as an essential part of the human development.

Walking away from the film, Davis hopes that audiences have a less limited view on how to play or interact with the world. We are not objects that are bolted to the ground like metal poles. We are free, movable objects moving within a space that can create a world in which imagination rules.