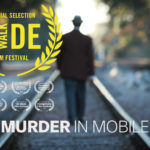 In 1948, in Mobile, Alabama, a black man named Rayfield Davis is beaten to death by a white man who is not prosecuted. The crime is forgotten until 2012, when the investigation is revived by a Northeastern law student. Her discoveries lead to a shocking conclusion.

Director(s) Bio:: I spent twelve years travelling the world, producing and directing a variety of shows and documentaries for television.

In 2017, I relocated to Boston, specifically Northeastern University, for the opportunity to concentrate purely on documentary storytelling and shining a global spotlight on topics that deserve and demand our attention.