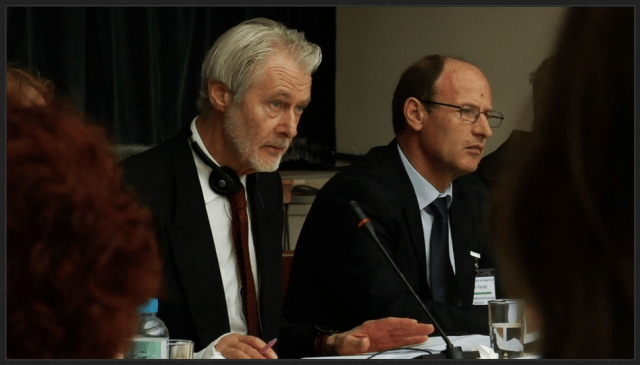 An Interview with James Demo

Having gone through the IFP Filmmaker Labs and in the midst of a Kickstarter campaign, Boston-based filmmaker James Demo talks about his film The Peacemaker, a portrait of the remarkable Padraig O’Malley–an Irish businessman, professor and recovering alcoholic who has become a worldwide figure in the resolution of international conflict.

James Demo is a Boston-based independent filmmaker whose feature documentary The Peacemaker is a portrait of the remarkable Padraig O’Malley–an Irish businessman, professor and recovering alcoholic who has become a worldwide figure in the resolution of international conflict. A rough screening of scenes from the film received accolades in Filmmaker Magazine, and the film was accepted into the IFP Filmmaker Labs where Demo received assistance and mentorship from top documentary filmmakers worldwide.

Demo has been working diligently to secure funding for post-production on the film through a Kickstarter Campaign. With barely a week until his April 30th fundraising deadline, Demo took the time to discuss his project with NewEnglandFilm.com’s Ted Ryan.

Ted Ryan:The subject of your film Padraig O’Malley has a fascinating story. How did you hear of him?

James Demo:I was in the Plough and Stars pub in Cambridge, MA and I heard that the owner of this little bar I was in, was in Iraq meeting with all of the key leadership from the conflict. He was trying to get them to meet with the Northern Irish and South African chief-negotiators to quell the violence. The more I learned, I knew I had to meet him and see where the story could now lead. Padraig was starting a new project bringing stakeholders from all sides of divided cities–in conflict zones like Nigeria, Kosovo and Iraq–together and I asked if I could follow him.

TR:Having previously made a comedic short film (with established Hollywood actors Amanda Plummer and Karen Black), did you have any doubts about transitioning to the world of documentary?

Demo: The short answer is no, but I came to realize shortly after I started that it should have been a resounding yes. Narrative filmmaking has a large crew, script, actors, lighting, blocking, a finite shoot schedule. With documentary you have much less control, it is often just you and a camera exploring what the story might be and capturing real events as they happen. It makes it thrilling but it was a steep learning curve and I was fortunate to know to ask a lot of questions to people much more experienced than I. I made a fair amount of mistakes early on and hopefully once you make a mistake its painful enough that you don’t make it twice.

TR:O’Malley has been referred to as a vanguard of world peace for nearly 40 years. What exact roles has he undertaken in this process?

Demo: Padraig holds a unique place in the peacemaking world in that he brings cultures in conflict together to help each other. Famously he worked with Nelson Mandela and other South African’s to help the Northern Irish through a difficult time before the Good Friday agreement. I interviewed Roelf Meyer–De Klerk’s chief negotiator–last fall, and he said it was the first time something like that was ever done in South Africa and Northern Ireland–the key figures from two of the seminal conflicts of the 20th century coming together to share experiences and advise. It is more common for it to happen today, but Padraig was the first and I don’t think there has ever been anyone quite like him. He really gets involved with a patchwork of people and financing in almost quixotic forays into these intractable conflicts that he somehow pulls off. I wanted to understand the how and more importantly the why he does what he does.

TR:A huge part of O’Malley’s identity is that of a recovering alcoholic. How has O’Malley’s sobriety played a role in his day-to-day life?

Demo: I think Padraig would tell you that his recovery is at the center of both his personal and professional life. He likens AA meetings to an insulin shot for a diabetic so he needs to go to meetings several times a week. Padraig’s life is very spare, he goes to meetings, eats at the same restaurant every night, same item off the menu, and works a crushing amount of hours each day. His work, the idea of sharing experiences, is directly connected to what he has learned in recovery. He and others have said conflict is an addiction, so his recovery permeates every aspect of his life. In Kosovo in 2010, I remember a delegate from Jerusalem saying to me, I feel like I am in a recovery meeting for peace, not knowing Padraig’s personal struggle and the connection it has to the work.

TR:Making a feature film takes an incredible amount of hard work, time, and persistence. Unfortunately, it also takes money. How did you establish a budget for The Peacemaker?

Demo: Well I have been filming for 5 years so no budget survives early on because of the indefinite nature of the process. I bought a camera, sound equipment and did most of the production myself in the U.S.. When we went abroad I always brought an excellent DP with me and that has costs that we would fundraise for and I was fortunate to have the help of many friends that would rally to the cause when needed. We were very lucky to get grants from the LEF Foundation for production and from the Sundance Institute–which allowed us to enter post-production. As we are now in post, the budget is very specific, we need x to do y, and we are fundraising around that, including our Kickstarter.

TR:You are funding post-production through Kickstarter. Can you tell us how these final donations will help complete the film?

Demo: All of the Kickstarter money will go to help us get to a fine cut. Erin Casper (American Promise, Our School) is our editor and I was really lucky to find her. She has incredible instincts with the footage and we have had a shared vision for the film from the beginning. We also are working with Patrick Smith from PBS’s Blank on Blank series, to animate small parts of Padraig’s backstory. People might remember Patrick’s animation of Philip Seymour Hoffman on Happiness. When I saw that I knew I had to work with him and Patrick has really responded to the material and what we want to do.

TR:Being a New England-based filmmaker, how has working in the local area enriched your project?

Demo: I could not have made this film without the community of filmmakers in Boston to turn to for advice and support. Documentary filmmakers are incredibly generous spirits that believe in the form and want films to succeed–I think partially because we all know how hard it is to make a film. I also pitched the film at Points North at Camden International Film festival in 2012 and that really was a turning point for the film in raising its profile and having others take notice of what we were trying to do. If I have any advice for someone who wants to make a documentary in New England it would be go to a Docyard or UMB Film Series screening and introduce yourself to other filmmakers.

TR:As you prepare to complete The Peacemaker (a journey that started in Boston but has now gone worldwide) – what are your ultimate goals for the film?

Demo: This is an exciting time for documentary films in that they have never been more popular and options for distribution have increased exponentially. We make these films to be seen and we want the film to get out into the world and have a life of its own. That is more likely today, but we don’t want to get ahead of ourselves. Everything starts with making a good film and that is the only goal in front of us right now.

For more information, see the Kickstarter page for The Peacemaker at https://www.kickstarter.com/projects/1688693416/the-peacemaker-post-prod…
or visit http://centralsquarefilms.com/.

For more information, see the Kickstarter page for The Peacemaker at https://www.kickstarter.com/projects/1688693416/the-peacemaker-post-prod… or visit http://centralsquarefilms.com/.