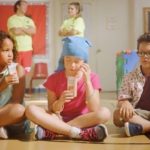 A vulnerable little girl believes that her curly hair makes her ugly and that straight hair is ultimate beauty, must summon the courage to embrace her natural locks and accept her true self in order to be happy.

New England Connection: Sharon Contillo is a RI filmmaker and the VP of the WIFVNE. CURLS was filmed in RI with all New England talent. In addition, Contillo won the 2019 RI State council on the arts grant for this short film.

Director(s) Bio:: Sharon Contillo is the founder of Middle Center Productions, LLC, where she focuses on female and family centric stories, films, books, and productions. Sharon writes, directs and produces films and stories with female leads of all ages and within all genres. She is focused on the underrepresented to give them a platform to be seen and heard.

Sharon is a screenwriter, executive producer, director, actor, and author. She has won the following
awards:

Sharon served as the writer, director, producer and starred in four IBM TRADE SHOW COMMERCIALS that have been shown around the world a trade show conferences. Most recently she Executive Produced JACK GOES HOME, (directed by Thomas Dekker and starring Britt Robertson, Rory Culkin & Natasha Lyonne). She is the author of the youth chapter book, THE LITTLE CHRISTMAS ORNAMENT and the writer, director of its animated trailer. She is currently in pre-production for the making of the animated feature, THE LITTLE CHRISTMAS ORNAMENT.

Among her other writings, Sharon has written a total for seven features that expand genres including horror, political drama, romantic comedy, family comedy, science fiction and animation as well as nine shorts. Sharon has a Bachelor of Science degree from the University of Rhode Island. She studied filmmaking and writing at the New York Film Academy and ScreenwritingU.