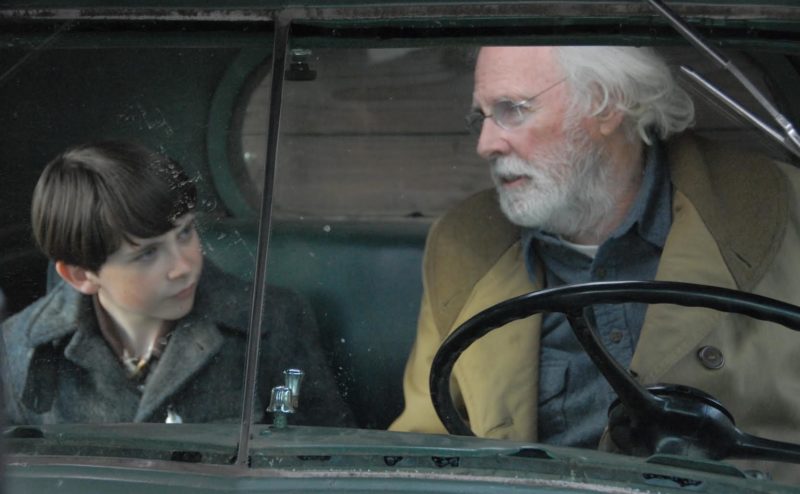 A student from Wellesley College called the experience ‘phenomenal.’ One from the University of Connecticut described it as a ‘grand accomplishment,’ while yet another, from Marlboro College, said it was ‘one of the best experiences’ the student has ever had. What is it that has students from these and other colleges so full of praise and enthusiasm? It’s the filmmaking experience behind the independent film Northern Borders, the inaugural film in Marlboro College’s groundbreaking Movies from Marlboro program which will be opening at the West Newton Cinema Friday, April 10.

Craven, an award-winning producer, teaches film studies at the college in Marlboro, Vermont and founded the Movies from Marlboro film intensive. Craven’s film credits include Where the Rivers Flow North, A Stranger in the Kingdom, The Year That Trembled and Disappearances, and he co-founded Kingdom County Productions with producer Bess O’Brien in 1991. Since the production company’s mission is ‘to strengthen community through the transformative power of film and the performing arts,’ establishing such a collaborative, ambitious program at the college fits with his mission.

Choosing Northern Borders, a film set in rural Vermont, to launch the filmmaking adventure also fulfills Kingdom County Productions’ goal to make films rooted in northern New England. In the drama, based on Howard Frank Mosher’s novel of the same title and set in 1956, pre-teen protagonist Austen Kittredge III is forced to live with his peculiar grandparents on their rural Vermont farm. By bridging the wide gap between his curmudgeonly grandfather and his off-beat grandmother, despite their petty squabbles, family secrets and a devastating loss, the boy comes of age and learns a lot about life.

After recently completing production on Peter and John, the second film in the Movies from Marlboro program, Craven is already preparing for the third–Wetware, a noir thriller. In the meantime, he took the time to answer questions about himself and Northern Borders. In the following interview, Craven graciously explains why breaking down the borders of traditional filmmaking education, can lead to great things.

Jay Craven: I have worked in film since I was 18-years-old, and I have taught film since I was 23. Screenwriting and film production provide dozens of learning opportunities–along the lines of education pioneer John Dewey’s inspired call for ‘intensive learning that enlarges meaning through the shared experience of joint action’ and his further prescription to find a multiplicity of learning opportunities, through a single focused learning experience that provides for ‘the full participation of all our powers in the endeavor to wrest from each situation its own full meaning.’ The process of making a feature film can provide that–if we invest personally and fulfill our own vision for our participation.

A film provides a multitude of learning experiences–drawn from the core and initiation of the project–which is larger than any of us. It’s a perfect vehicle for effective mentorship, learning, collaboration and actual experience.

CG: When you were an aspiring filmmaker, did you have mentors or a hands-on experience that influenced your craft?

Craven: I did. I had a classmate in high school and college, who made a Super 8 film in which I participated. He was a peer and an inspiration to me. I took a class at the School of Visual Arts, where we collaborated to make a half hour 16mm narrative. The teacher was an established film director, Dan Wolman, who responded to my work and got me additional work after the class; he believed in me and helped me develop. This was key. I didn’t study film in college, although I made films while there. I studied political science and history and became an activist and got involved with a documentary about the Vietnam War. Howard Zinn became an important and life-long mentor to me, starting with my days at Boston University.

CG: Why did you choose Northern Borders as the feature to launch the film intensive?

Craven: I got approval to launch the first film intensive in late April of 2011. I had another project in mind that needed more work and had lots of characters and locations. I had worked with Howard Mosher’s stories on four previous occasions, so I was familiar with them and felt I could adapt the script quickly. It’s also a very nice chamber piece with three main characters and limited locations. And very ‘castable’–I felt–with significant actors. I also knew it could be shot close to the college. It was a good first project.

CG: It must have been an action-packed semester. What was the timeline like?

Craven: We started in mid-January with a week at Sundance, eight weeks of classes, workshops, visiting artists, student filmmaking, casting and pre-production at Marlboro College–then, six weeks of production. Yes, very intensive–and down to the last minute. We knew we had accomplished something when it was over, and that the educational part of it had succeeded. Student evaluations were fabulous.

CG: What was the biggest production challenge, and how did you overcome it?

Craven: We wanted snow. Didn’t get it. Our camera back-ups and data storage failed for the first two days, causing us to have to re-shoot.

CG: There’s been a lot of praise for both the film itself and the educational experience it offered. From what you’ve seen, how did it enrich the lives of the professionals–including Bruce Dern and Genevieve Bujold–and the students?

Craven: Bruce Dern credits his experience on Northern Borders as being the ‘boot camp’ experience that helped prepare him for his work on Nebraska. He wasn’t sure, at first, about working with students. He became a huge advocate for the program, even coming to Nantucket the following summer to appear at a benefit event for the program. You can see him talk about it online.

Genevieve is a trouper. I’d worked with her before on my film, Disappearances, with Kris Kristofferson. And she was a pleasure to work with. At first, she wasn’t sure she wanted to do the project. She didn’t understand why the character would stay with this tough old Yankee farmer, and why she created this imaginary world of Egypt in her house. But after a two hour phone call, she was excited to take it on. From that point forward, she was completely committed and was able, I think, to bring magic to the part.

CG: For you, personally, what was the most rewarding part of the experience, and how do you hope Movies from Marlboro will evolve?

Craven: For me, the most rewarding part of this project was the success of this educational experiment that brought together a fabulous creative community of students and professionals. It was the richest educational experience in which I’ve been involved and the most enjoyable production experience. The collaborations with the actors and creative team leaders were also very stimulating and rewarding. I most enjoy the process of working with actors to discover moments of nuanced and unanticipated articulations of character. This happened on Northern Borders. I got to make and then tour another film. What could be better?