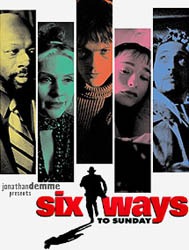 ‘Six Ways to Sunday’: a review

Share
A review of the film starring Deborah Harry.
The experience of seeing "Six Ways to Sunday" reminded me of a conversation I once had with my great-uncle. After learning that my college roommate was Norman Mailer’s youngest daughter, he bought a few of Mailer’s novels. A retired Navy officer, he usually sticks to spy stories, and he wasn’t impressed by what he read. "These things are filled with every kind of filth," he said. "It’s just sickness and depravity." While I tend to appreciate Mailer’s work, I have to agree with my uncle that his subject matter frequently veers toward the distasteful.

Thus, my reaction to "Six Ways to Sunday": it’s a fairly well-crafted gangster movie, with a carefully considered story and excellent performances, and I just didn’t like it. While I don’t deny the use of sickness and depravity as an artistic choice, this movie is certainly filled with them. Moreover, while I am perhaps revealing that I’m less than a film aesthete, I’m sick to death of blood-soaked gangster movies. Isn’t there a way, aside from shooting or beating a character to a bloody pulp, to introduce the color red into the frame?

The film is being marketed and reviewed as a black comedy, though I found scant humor in its bleak tale. Harry Odum (Norman Reedus) is a teenager, living in rather sickening circumstances with his mother (Deborah Harry) in Youngstown, Ohio. The opening shot is of her bathing him. Harry discovers an affinity for beating the crap out of people, and lands a job with the local mob. His mother couldn’t be more proud, though she worries that he might be spending time with girls. Various killings take up much of the screen time, but it’s the oedipal conflict that really drives the story.

The Deborah Harry mentioned is, in fact, the former lead singer from Blondie, and she’s fantastic here. Looking tired and worn, she’s nonetheless sickly alluring to her son. The director shrewdly trades on her former image: you keep wanting to see the blond sexpot in her lined face, but instead of being a distraction, the memory adds to the character’s air of diminishment. And she and Reedus display just the right combination of manipulation, love, and disgust to fuel the movie forward.

It’s an interesting dynamic, and a well-made film from a Boston-based production company, Scout Productions. I just wish I could say I liked it.