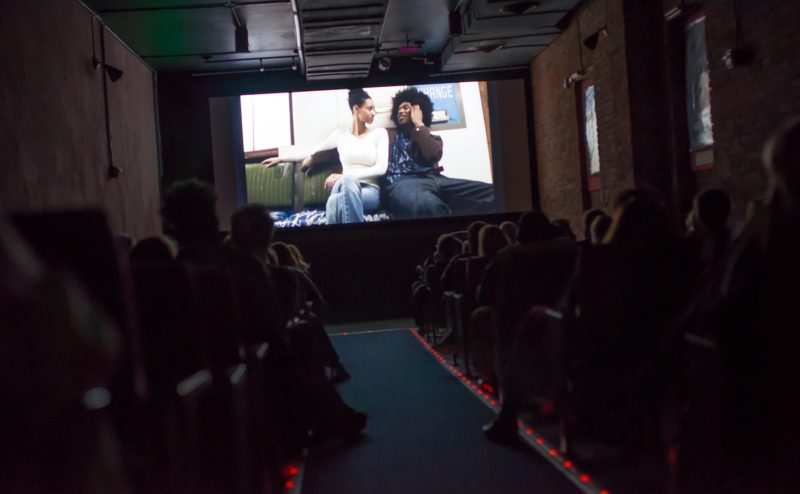 Share
Sky Barsch interviewed faculty at the Vermont College of Fine Arts about their current work -- from visual effects to documentary films -- and about how the unique program at VCFA challenges a new generation of filmmakers.

If you take a map of the world and place a pin where each of the Vermont College of Fine Arts (VCFA) MFA in Film faculty is at any given moment, your pins would span continents and time zones, studding the map from Los Angeles to New York to Iran to India. Color-code the pins for project type–directing an intriguing documentary, creating dazzling visual effects in post-production, writing the final scene in a feature film–and your map would light up like a rainbow. Jot notes for the project details, and familiar names like Coen Brothers and The L Word fill the margins.

That’s what’s so striking about VCFA’s MFA in Film instructors—they are industry pros, actively creating some of the best film and television out there. They bring this experience to the program, giving students authentic guidance and advice for their film projects.

The nearly two-year-old program is the country’s (and possibly the world’s) only low-residency MFA in film, which makes it attractive to filmmakers who want to improve their craft, but can’t or don’t want to relocate for a residential graduate program. Thanks to the Internet and digital technology, students and faculty can connect throughout the semester, from movie sets, editing rooms or in between screenings at a film festival.

‘It wouldn’t be possible without digital technology,’ says Stephen Pite, director of the MFA in Film program. And that not only goes for communication between instructors and students, but also the filmmaking itself. Relative affordability in filmmaking equipment, plus crowdfunding sites like Kickstarter, and new distribution channels on the Web have made filmmaking more accessible and possible than ever before–the same way desktop publishing software changed graphic design and journalism.

‘It’s an expensive habit,’ Pite says of filmmaking, ‘but these changes have brought the threshold lower. It’s far more interesting to think there are all kinds of new demographics that are able to make films and they have different interests and they tell different stories. And they are creating different forms for those stories. It’s such a dynamic and fluid global change.’

The program is founded on a carefully selected faculty and a student-centered course structure. The MFA is designed not to teach students how to make films, but how to make films better. Each semester, students–most of whom have three to five films under their belt–come for a one-week residency on campus in Montpelier, Vermont, team up with a faculty mentor, and design their coursework for the coming months. Between 45 and 70 students participate in a residency, and they learn, talk, share projects and eat meals together. ‘They come together as a community,” Pite says. “There’s a synergy that happens.’

Then each month, typically via Skype, students spend an hour talking with their faculty mentor to show the work they’ve done and to gain valuable advice on how to improve and move forward.

‘The hour-long conversations are the meat of the mentorship,’ explained instructor Dan Schrecker, an award-winning visual effects artist and animator based in New York. ‘It’s a process of discovery. We’re trying to get at the heart of what they’re trying to do, to figure out the logical next step while keeping the end goal in mind.’ Here’s what a few faculty have to say about their experiences at VCFA.

A senior visual tech supervisor at Psyop Film and Television, Dan Schrecker has helped create some of the most incredible visual effects on films such as Black Swan, Life of Pi, and Requiem for a Dream. His recent projects include work on American Ultra, A Most Violent Year, and Hail, Caesar!, a new Coen brothers film.

‘My job is working with directors and production teams to figure out what their visual effect needs and desires are,’ Schrecker says, ‘and tracking that all the way through production, going on set, into post-production, working with the director and editorial team to complete all the shots. ‘For instance, on the film Limitless, the character takes a pill that makes him super smart, and experiences a ‘time-trippy travel sequence through the city,’ ‘ Schrecker says.

‘We came aboard to conceptualize the whole sequence. …We got three cameras, mounted them next to each other with different lenses to achieve what the director wanted.’ Schrecker remarks on the great difference between his educational experience studying animation as an undergraduate and interactive telecommunications in graduate school, and what he is part of at the Vermont College of Fine Arts. ‘That was a very solitary existence, what I was doing,’ he says. ‘Each year I would make three films in my room or closet, animating for long stretches of time. I didn’t seek or receive a tremendous amount of mentorship.’

The residency at VCFA creates a real community, he says, and the monthly conversations with his mentees help move their projects along. He likens it to work he has done with directors to move commercial projects forward. ‘What I really like is every student is different, their needs and their projects are completely different. The way I approach it varies depending on which student I work with. I have a number of roles—creatively helping them wrap their head around the process as well as coaching them, helping them to produce work.’

A feature filmmaker, Terence Nance is currently working on two short films, You and I and Swimming in Your Skin Again, both surrealist pieces about family. Swimming in Your Skin Again chronicles one man’s individual growth inspired by, and in pursuit of, the divine feminine. This happens in various locations in and around Miami, Florida: a church, the swamp, in the backyard, by the water, in the streets.

Born into a family of artists, Nance has spent most of his life involved in the arts, including an undergraduate degree in visual arts, making music and of course, making films. He’s a jack-of-all-trades when it comes to filmmaking—writing, shooting, editing—which makes him valuable to students with questions during any stage of their projects. He sees the MFA experience as a way for students to give themselves the space to look at their filmmaking goals from a conceptual level—to step back and get out of the day-to-day.

Nance has found that mentorship leans more toward teacher as coach rather than technical advisor, and that sometimes the most effective thing he can do is remind students that they are capable enough and talented enough to pull off their projects. He’s been struck by the diversity of ages in VCFA’s MFA in Film program, which he says adds a richness that wasn’t there for his own educational experience.

An experienced documentary filmmaker, Lisa Leeman’s current project, Awake: The Life of Yogananda, is now showing around the country. She co-wrote and co-directed the film with Paola di Flora, documenting the life of swami Paramahansa Yogananda, who is credited for bringing yoga to the Western world. Yogananda authored Autobiography of a Yogi, a book that became popular in the 1960s and was for many the entrée into Eastern spirituality. It has an important place in popular culture—George Harrison dedicated a song to Yogananda, and Autobiography of a Yogi is believed to be the only book that was on Steve Jobs’ iPad (each attendee of his memorial service received a copy of the book.) Leeman has been working on the film for the past five and-a-half years, asked on the project by di Flora. She’s using crowdfunding site Gathr to set up screenings of the film—50 or so viewers must buy tickets ahead of time for the film to show in a particular city. It’s going well so far; Awake has broke half a million dollars already.

‘The film is speaking to our time,’ she says, as more and more Americans are being drawn to yoga and Eastern-style spirituality. ‘We are living in a really challenging time, with economic hardships and environmental challenges, and the pace of the world. Everyone I know is feeling a bit overwhelmed by the demands of the Internet. Yogananda taught, always reconnect with that sense of peace and equanimity.’ Leeman is new to the Vermont College of Fine Arts, and currently mentors three students.

‘The residency was an impressive immersion experience,’ Leeman said. ‘I was really impressed with the sense of community among students and students and faculty. It’s very supportive and community-based.’ She’s working with each mentee to develop a study plan so they can work towards their goals, which might be developing stronger storytelling skills, improving directing skills, or producing a specific type of film, such as an advocacy film. ‘I can give them assignments, but they’re really coming up with the bones of their plans, and we’re shaping it together.’

Writer, director, producer, sometimes cameraman, Till Schauder goes to great lengths to make films about sensitive and uncommon subject matters. He made The Iran Job, about an American basketball player who signed on to play with the new Iranian Super League team A.S. Shiraz. Schauder had to produce the film largely under the radar in Iran. Last year, he shot a film about Jamaican football and music, and now he’s making a film about an Iranian rap artist living in exile after being issued a death fatwa for his satirical song about one of the Shiite imams. Part of the founding faculty for the MFA Film program, Schauder enjoys being involved with the students’ works.

‘I seem to have a reputation for being a hard-ass,’ Schauder says, pointing out that he holds students to deadlines. ‘I’m also a cheerleader. And sometimes a bit of a shrink.’ He worked with five students last semester, three of whom are working on fiction films and two on documentaries, all at different phases of production. ‘I have students that are already accomplished, who could be teaching themselves. They are more like peers. It’s a different relationship than someone who is young or new to filmmaking, and you have to adjust to who the student is. That’s one of the things I enjoy about it—all the different characters.’

After the residency, Schauder makes it clear to students that their once-per-month Skype call is extremely important, and the only guaranteed communication he’ll have with them. He wants to establish professional habits with students, and set clear expectations. ‘We meet once a month on Skype,’ he says. ‘Every month they have a set amount of deliverables that we agree on, that they have to produce, and it’s kind of a deadline for them every month to keep them on track. My job is to guide them through the process and keep them on track. To keep inspiring them.’

These filmmakers are a few of many who make up the MFA in Film program at Vermont College of Fine Arts. For more information, contact Stephen Pite, Director MFA in Film, or visit the web at vcfa.edu/film.

These filmmakers are a few of many who make up the MFA in Film program at Vermont College of Fine Arts. For more information, contact Stephen Pite, Director MFA in Film, or visit the web at vcfa.edu/film.