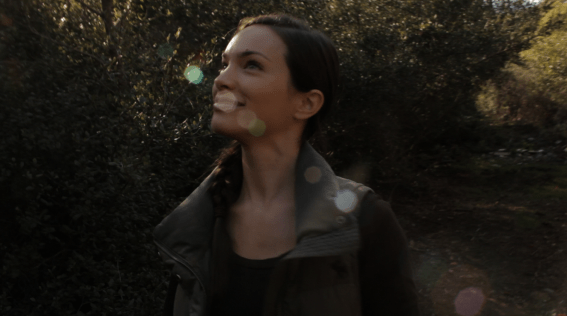 This series of articles will feature interviews with established and emerging female filmmakers with strong connections to New England, as well as prominent industry figures from our region. Filmmaker Catherine Stewart discusses distribution, finding work, making connections, and handling collaborations, along with whatever else comes along. We encourage you to join the conversation here on NewEnglandFilm.com or on Twitter using #femalesinfilm.

Empyrean is inspired by my experience of losing my own father to terminal brain cancer. Within three months of being diagnosed, he was gone.” Sophia Savage explains, “It’s my attempt to process what had happened in that brief time.” Savage’s approach to telling this story doesn’t follow any typical structure, and she’s made bold choices in style, look, and feel that proves this first-time director is a creator to watch in the future.

Empyrean is part of the 6th Annual Online New England Film Festival, which runs from September 1st to October 15th, and features dozens of short films that have screened at regional film festivals. Empyrean played at several festivals and won “Best Director” at the Amsterdam Film Festival and “NH Short Film of the Year” at the New Hampshire Film Festival.

Savage is excited to be part of the online festival: “It is an honor to share this film with my local community. New Hampshire is where I grew up and where my entire relationship with my father took place.” Creating Empyrean and sharing it with audiences has been tremendously important to Savage. With a subject matter so close to her heart, it presented many challenges but it also offered an opportunity to explore the experience from new angles.

“The process of making the film was incredibly powerful and cathartic for me. The silver lining of losing my father too soon was that I could find my voice as a director and throw fear and doubt aside; there’s an urgency and gratitude I feel for my life now that I wouldn’t comprehend without this experience. That I’ve been able to share the film with audiences, and had people relate to it in such personal ways, is really the cherry on top.”

Although Savage takes on acting, directing, producing and editing in this heart-felt short, she wasn’t working alone. “Chayse Irvin, my cinematographer, was the first person I brought on to the project. I cannot express how crucial he was to the process and the quality of the film. I have so much respect for his dedication to truth and beauty. We shot with natural light in a gorgeous location — Topanga, CA — and used anamorphic lenses. It may sound silly, but I really feel like we captured some magic in that time and space.”

Even though her experience with Irvin was productive and valuable to her growth as an artist, Savage is extremely aware that this isn’t always the case during her collaborations. “As a perfectionist who knows what she wants and has very specific taste, I know the risk of being perceived as difficult to work with; any strong woman in this industry is going to face people who want to label her a doll or a bitch, never an ‘artist.”

Savage also appears to be bringing the best to her upcoming projects – she is currently in post-production for her first short documentary that she shot whilst traveling. “My DP was kind enough to let me take his camera for two months, and I just taught myself how to use it while living in a small village in Nepal, where a story emerged.”

Savage is also working with filmmaker and social activist Jenna Cavelle on a new web series based on the real life experiences of women who enter into prostitution to pay for expensive college and post-graduate education. “Sugar Baby focuses on the psychological factors that lure women to this profession, and the various social taboos that are hiding right beneath the surface of our shame and fear-based culture.’ Savage and Cavelle want to push the genre of web series in new directions, finding art in all manner of places and presenting it in a challenging but thoughtful way. I, for one, can’t wait to see what this multi-talented filmmaker has in store.

You can watch Empyrean alongside the other great short films during the Online New England Film Festival.

As part of the Females in Film series, I will be speaking with other female filmmakers who are presenting work during this year’s Online New England Film Festival in the coming weeks. And remember you can join in the conversation online at NewEnglandFilm.com and on twitter using #femalesinfilm.

More about Sophia Savage can be seen at http://www.savagesophia.com/.

More about Sophia Savage can be seen at http://www.savagesophia.com/.