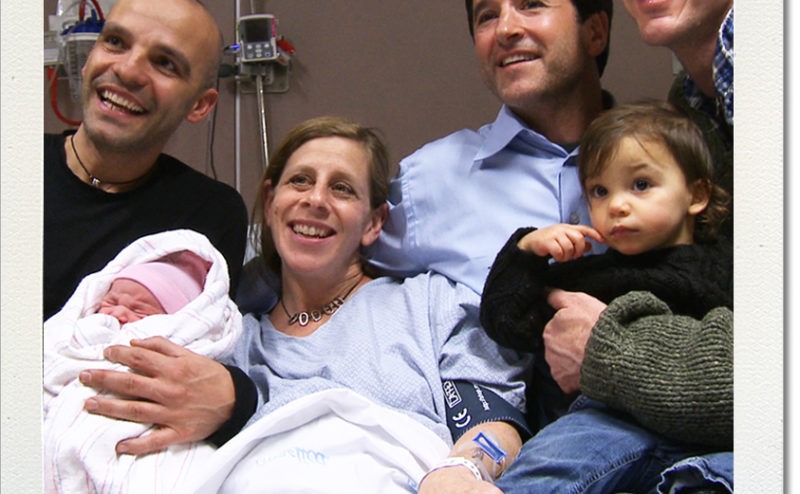 Share
Every month, NewEnglandFilm.com is highlighting exciting new local film projects looking for funding. This month, kick in a baby shower donation to documentary The Guys Next Door, following the journey of a gay couple and their gestational carrier. To feature your film in this series, e-mail editor@newenglandfilm.com with a blurb on your film and Kickstarter campaign.

Massachusetts filmmakers Amy Geller and Allie Humenuk seek support for their upcoming documentary The Guys Next Door. The film follows two families living in Maine and Massachusetts: Erik and Sandro, a gay married couple; and Rachel — who offers to be their gestational carrier — and her husband Tony. When the film opens, Erik and Sandro are parents to their first child (also carried by Rachel), while Rachel and Tony have three children themselves. The story, shot over a year and a half, follows Rachel’s second pregnancy as a gestational carrier and the challenges facing both families.

Co-directors and producers Geller and Humenuk, both of who have extensive experience in film and television, feel passionate about the film and its message. On the film’s website, they explain, “Our country is reaching a tipping point in the swift-moving fight for gay rights.” They believe that to support The Guys Next Door is to voice “a strong, unequivocal ‘Yes’ to gay rights in America.” Geller is the current Artistic Director of the Boston Jewish Film Festival and has worked on projects for HBO, PBS, MTV, and more. Humenuk is an Emmy-nominated director, cinematographer, and editor and has taught at Harvard University and Massachusetts College of Art.

With support from the LEF Foundation, principal photography has completed. The filmmakers hope to raise $15,000 by August 1st. These funds will be used for post-production and raising interest and awareness in the project, including film festivals and outreach to community organizations and schools. To make a donation and to read more about the project, the families involved, and the filmmakers, visit the film’s website.