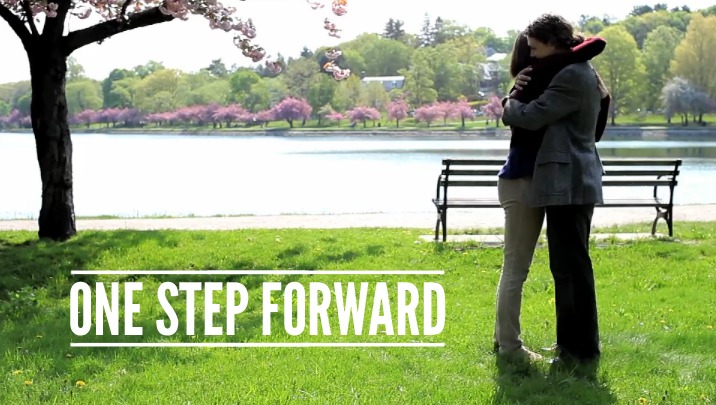 Share
Joel Marsh is living the dream -- at age 22, he’s had the short film he made in 48 hours accepted into the Cannes Film Festival and going viral around the globe.

Natick native Joel Marsh got his first camera as a birthday present from his grandmother when he was 13 years old. That was when he and his friend Ben Crowell, who lived down the street from him, started making films. A few years later they met Luke Bradford, a musician and composer. Their story is one that every filmmaker dreams of — make as many films as you can, put your stuff on YouTube, enter festivals, then get “discovered” and end up at Cannes. At 22, before Marsh had even completed his schooling, he and Crowell and Bradford have done just that.

Short film One Step Forward, fresh from Cannes, evolved from a vision Marsh had. He had an image of a man waking up in the forest, with the film going backwards to his daughter’s birth. Though that specific event was altered, the sentiment behind it as well as the reverse order, remained, and the team built their 4 and1/2 minute film from there.

The short was created for the Boston 48 Hour Film Festival, in which the filmmakers only had 48 hours to complete a 4 to 7 minute film, making sure to include the name Uncle Hank, a chess piece, and the sentence “I didn’t see that coming.” The trio completed the task with a budget of 200 dollars and a five-person crew. Used to making their own equipment (and therefore saving hundreds of dollars), Marsh created a steady-cam built out of a wooden dowel and a paint can that hung from a string for weight. The team has always built their own dollies and finds self-satisfaction in that what’s created from their ingenuity ultimately actually works. Marsh quotes Orson Wells whose words he subscribes to when he says, “ The enemy of art is the absence of limitations.”

Clearly this trio isn’t thwarted by the usual limitations. After winning the 48 Hour Film Project, they moved on to the wider competition, which includes winners from 100 cities across the states. There they also excelled and were one of a few tapped to go to Cannes. Though several shorts appear at Cannes in a small venue, few get a separate, scheduled screening time as One Step Forward did. The film has already gone viral on Vimeo and has was screened at the Coolidge Corner Film Shorts Program. It is proving immensely popular internationally in places like Japan.

Marsh has already learned a humility that can only enhance his career. He is grateful for his acting and filmmaking friends who willingly come forward to work on his projects. Marsh tells me he believes that if you treat the people who are working with you kindly, they’ll continue to be there for you. There’s no room for prima donnas in his film world, himself included.

Now that they’ve conquered Cannes, where are these filmmakers heading next? Crowell, who acted in One Step Forward as well as co-produced, co-directed and co-wrote with Marsh, is a sophomore, working towards his degree at film and video directing at California Institute of the Arts in Valencia. Bradford, who composed and performed the music for One Step Forward, graduated with a degree in Computing and the Arts from Yale University and is headed to a job as a programmer for iZotope, a Cambridge, MA based company. Continuing with composing music for films is also in his future plans. Marsh, who has been talking to me from his Honda during a long stretch of highway in Nevada, is driving west to the University of Southern California where he will be one of only 50 students accepted into the school’s Masters program for film production. He is a recent graduate of Northeastern University in film and communication, and before leaving accomplished further wins for bests in film, directing, acting and cinematography (which he is also responsible for, among other tasks, for One Step Forward) for The Bunny in Northeastern’s Campus Movie Fest. As for a film career, Marsh says he’s in no rush. The film program in California will take three years and he welcomes the level of competition he’s anticipating experiencing there. He also welcomes the high level of the teaching staff as an opportunity to soak up yet more skills and continue to hone his craft, develop his art and ultimately, end up with one very solid film. At 22 he feels he still has a lot of growing to do as a filmmaker.

Marsh attributes the wild success of One Step Forward to a few things. “It is a single, simple story with a great main character. The technical aspects and cinematography are very good. There is little language involved,” — though the happiness of the film shines through — “and it is a situation most can relate to, making it easily accessible to audiences everywhere.” The success probably also comes from the fact that Marsh has made almost 30 short films since he began at age 13, and he’s constantly looking to learn and try more.

Marsh has definitely taken that advice to heart. One Step Forward is a romance that’s colorful, happy and human, certainly reflecting the attitude and hopefulness Marsh exudes from his Honda, while clearly setting off for a serious, rather than haphazard, road to success. Cannes was undoubtedly a huge high point; one that Marsh feels helped toward his graduate school acceptance. He also hopes it’s a recognition that will give him clout for raising funds for future projects as well as provide benefits from contacts made there. But though a pinnacle of success to some, I have the feeling it is just one more cinematic stop along the journey for Marsh and his film partners.

To learn more about One Step Forward, click here.

To learn more about One Step Forward, click here.