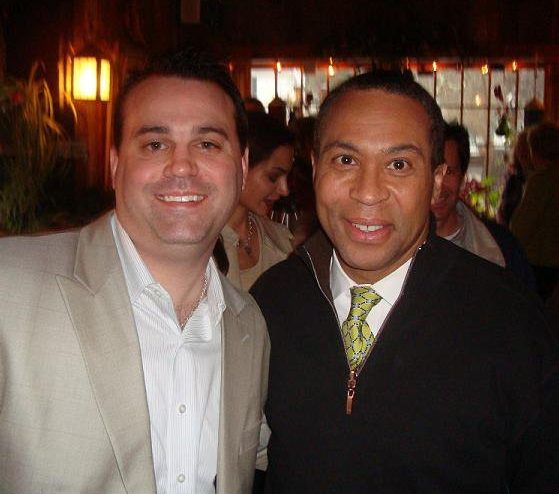 Share
Local actor Chuck Slavin takes matters into his own hands as an activist to sustain the local film industry. As founder of New England Talent & Crew and the man behind the monthly Filmmaker Shindig meetings, Slavin has a mantra: film tax credits bring jobs and money to our region.

Boston actor Chuck Slavin is no slouch, although he’d be happy to play one in your next film. His characters have run the gamut from policeman to gangster and priest to janitor. In his career, he’s worked on dozens of productions including Hollywood heavyweights such as The Departed, Brotherhood and Pink Panther II and local indie productions such as the award-winning spoof Gay Marriage Ad.

As a Screen Actors Guild (SAG) and American Federation of Television and Radio Artists (AFTRA) member, Slavin has realized his livelihood depends on a flourishing local film industry and has become a tenacious activist to foster just that. He founded New England Talent and Crew, a group dedicated to serving the needs of the New England film community, and orchestrates the monthly Filmmaker Shindig meetings in Massachusetts. Just recently, he was elected as a local delegate to attend the upcoming national AFTRA convention in Seattle. Although he lost his election for the local AFTRA board by one vote (which proves, as he says, that “all votes count in every election”), he will be running for the Screen Actor’s Guild local board. Recently, Slavin took time to speak to NewEnglandFilm.com about the state of the local industry and his role in helping to foster it.

Michele Meek: How did you become an activist in the local film community?

Chuck Slavin: Early on I was very lucky to meet my friend Casting Director Jodi Purdy-Quinlan. Through Jodi’s mentorship and the support of others in the industry, I was able to network onto the local film industry’s fast track. I was off and running, propelled by that networking in combination with the timing of the introduction of the Mass film tax credits. Shortly after, I began networking and working throughout New England.

In roughly 2008, after being one of the first local actors to advocate for a major motion picture studio, I founded New England Talent & Crew, a Facebook Group that quickly garnered a huge following. With that group, I am able to spread the goodwill of people such as Jodi who are willing to open their arms to anyone seeking the ability to network for film information. When times got shaky and the film credit’s future was in jeopardy, we were able to rally the group and organize at the State House as well as support film-friendly candidates such as newly elected Rep. Steven Howitt. On behalf of the film community, I urged the governor to rethink his proposal of capping the credit, a speech that could be easily viewed due to social media.

MM: Why is it important to have a film tax credit locally?

Slavin: I am sure you have seen first-hand the positive effects of a film credit. We saw the increase in productions in Massachusetts through 2009. In contrast, we felt the holdback from Hollywood in 2010. A major reason for this decline in 2010 was due to the misinformation caused by the introduction of HB3854. This suggestion of rolling back the credit deemed Massachusetts unstable, or “too much of a gamble” for filmmakers needing to secure, and adhere to, their budgets. After all, this is a business. It is termed a credit, but I consider it a “rebate” because it’s creating immediate, real jobs and placing money into the economy before production even begins. Let us not forget, 25% of $0 is $0. We are seeing the growth of the industry in our region. Our existing infrastructure has the talent and experience of high-end studio productions. The benefits to the municipalities, businesses and individuals are unequivocal.

MM: What is the status of the Massachusetts film tax credit now?

Slavin: First and foremost, I commend Governor Patrick for his recent steps in protecting film and its future in Massachusetts. He has made significant changes to the film office, making it an official state agency by placing it under the Office of Travel and Tourism and leaving the Mass. film credit untouched in his budget. He has appointed a new Film Commissioner, Lisa Strout.

The Travel and Tourism Committee, comprised of both senators and representatives, recently held a briefing with the film community to discuss the steps required to support the credit and the film industry. This is a huge win for the film community. After a bleak 2010, we now have three feature films currently in production and a mega-budget movie on its way for the fall. Hopefully, there will be many more to follow in the New England region.

MM: What needs to change for film to flourish locally?

Slavin: First, let me state that at this time I do not support implementing any quotas on hiring locals. I think it’s too early for that. Sooner rather than later producers are learning that we have a solid crew and talent base, and money can be saved on housing and travel expenses because of that. Canada has legislation that mandates hiring quotas, but Canada also has major motion picture sound stages. Our next local move should be to support world class sound stages that rival Hollywood, New York and Canada. I still support an infrastructure bill that would entice sound stages to be built as soon as possible. Once we have the “brick and mortar” we will be able to house many more productions, episodic television–and keep producers happy with the accommodations. I want us to avoid losing any more work because of a lack of a facility to house large productions.

Going forward, the Department of Revenue (DOR) report must be corrected to encompass other positive effects of the film industry. There are gaps in the report that do not consider the benefits to ancillary business and municipalities. These omissions must be addressed in order to accurately portray and assess the success of the industry’s financial impact. Addressing such shortcomings can help diffuse potential objections regarding the importance of supporting industry growth.

MM: Are you involved in supporting the film tax credits in other states, such as Rhode Island?

Slavin: I am an active member of the Rhode Island Film Collaborative. I support Rhode Island Film by helping to organize meetings, notify New England Talent & Crew members of tax credit and production news in Rhode Island and in other states, and provide ways for members to get involved. We should never view any other New England states’ film productions or tax credits as competition and should continue to help support each other in the region. Tax incentives in any of the six New England states affect us all. I know many who travel across the borders to work. When we stop in Rhode Island to buy gas, we are putting money into Rhode Island’s economy, and vice versa. If we work in another New England state we pay income tax to that other state. We need to be competitive as a region! We have to work together to really make these incentives work.

MM: How do you think the future looks for filmmaking in New England?

Slavin: I am extremely optimistic that legislatures’ support will continue to advance the film industry. This is key in firmly establishing Massachusetts and New England as a film-friendly location. Hopefully, we will see major motion picture sound stages by the end of next year which will continue to entice more productions and episodic television to the area. This will give us the ability to move forward together to create a landscape that yields regular film, commercial and network opportunities that create immediate returns as well as a residual economic impacts that will last for decades.

MM: What can individuals in the industry do to take an active part in protecting the future of film locally?

Slavin: We need to make our voices heard and continue to fight to validate the positive impact of our industry. Becoming politically involved is the only way to do this. Communicate with local representatives and senators to determine where they stand on film tax credits. Urge for support or offer appreciation for their continued interest. Never let opportunities to talk to the legislature about our passion for the film industry go to waste.