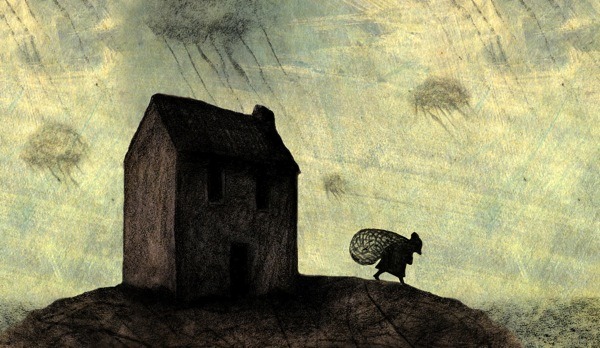 The Lullaby of ‘Jelly Fishers’

Share
Writer-director Steven Subotnick shares his thoughts on his animated film Jelly Fishers, which tells the story of a family of hungry mole-creatures and their encounter with a jellyfish and screens as part of the 2010 Online New England Film Festival.

Steven Subotnick lives and animates in Providence, RI. An independent filmmaker, he draws on history, folklore and the unconscious to create animations like Jelly Fishers, which is featured in this year’s Online New England Film Festival. This week, he talks about what inspirations led him to the story of Jelly Fishers and how he creates his own particular style of animation.

Steven Subotnick: I was inspired by a lullaby from the island of Guernsey called ‘Cha Chon.” The melody is slow, sad, and repetitive, like a dirge. The words tell a story about a hungry child and cat at home, waiting for grandmother to come home from fishing. In the lullaby, it is uncertain whether the grandmother will bring any food home. I wanted to make a dream-like animated lullaby about hunger and anxiety.

Aside from the lullaby, I was thinking about the moment between wakefulness and sleep as the boundary between life and death. The sea is a natural metaphor for death because it is another world we cannot cross into without dying. I was interested in exploring the tension of this duality. Jellyfish play a major role in the film because they move so gently and slowly (like a lullaby), but also because they are so full of dualities. For example, they look like wombs, but they are predators; they can be eaten, but they have no nutritional value; they are beautiful, but they sting.

AR: Can you describe your process in creating the style of animation you use in your film?

Subotnick: My process is very consistent from film to film. I start with an inspiration of some kind (usually from a piece of folklore or history) and then I make lots of artwork and animation in response to it. As I make the artwork, my ideas multiply in an associative way. I try to visualize as many of these related ideas as possible. Eventually, I feel I have enough material to begin looking for a unifying structure through editing and sound work. The film finally comes together in the editing stage.

AR: What is the most difficult thing about it? The most rewarding?

Subotnick: Working intuitively without a plan or a storyboard is difficult because it requires a great deal of patience and faith. I have to trust the process and believe that it will produce a workable film in the end. This is not easy for me, but I have found that if I let the film develop naturally — without forcing it — the final result is more satisfying. I think I work this way because I want the film to have an organic identity of its own.

AR: What influence, if any, do you think living in Rhode Island had on Jelly Fishers?

Subotnick: Living in Rhode Island had no direct influence on Jelly Fishers, but being here has influenced all my filmmaking. I am from Los Angeles, and I attended film schools there, but I chose to leave Hollywood and find a place where I could make personal animations without the influence of the commercial filmmaking world. Living in New England and working as a teacher has enabled me to do that. Here I have the mental freedom to make my own very personal films.

You can find Steven Subotnick’s film Jelly Fishers at https://newenglandfilm.com/festival/2010/jellyfishers for the duration of the 2010 Online New England Film Festival.

You can find Steven Subotnick’s film Jelly Fishers at https://newenglandfilm.com/festival/2010/jellyfishers for the duration of the 2010 Online New England Film Festival.