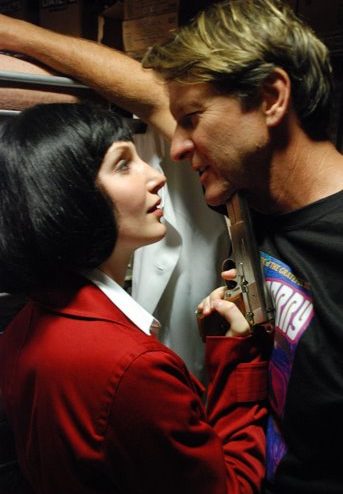 Share
Writer-Director Mitchell P. Ganem shares his thoughts on his film 'Killing Dinner,' which tells the story of a special ops agent turned chef, and what happens when old lovers and comrades in arms come calling with guns blazing. Readers can watch the film online this month as part of the Online New England Film Festival.

Filmed entirely on location in Portsmouth and Hampton Beach, New Hampshire with a cast and crew from the New Hampshire and Massachusetts film communities, Killing Dinner scsreened at the New Hampshire Film Festival. Both Mitchell P. Ganem and producer Mark S. Constance were born and raised in New Hampshire. Mark still lives in the state and Mitchell spends as much time there as possible (especially in the summer).

This week, Mitchell P. Ganem spoke about making his film, Killing Dinner, which is featured in the 2010 Online New England Film Festival.

Mitchell P. Ganem: Films always come from different places. This one came from a combination of necessity and inspiration. With my producers, Tracey Becker and Mark Constance, I have been trying to get funding together for my feature film Losing Jerry. And while we know that we know what we are doing, nobody else seemed to think so — despite our collective lifetimes in the film business and the projects we have been involved with. So Tracey said, ‘You have to make a short film.’ Easier said than done.

Finding a story that interested us was the hardest part… One night, I was standing in my kitchen, contemplating dinner. In another life, I was going to be a chef and I know my way around a kitchen really well. That night, as I was chopping at the butcher block, the phrase ‘Killing Dinner‘ came to mind… When I think about cooking, I often wind up thinking about sex. Seduction can begin on the palate as easily as it can on the bed. The physicality of cooking dinner, while thinking about sex and its permutations, led to, well, a movie about sex, betrayal, guns and the irresistible urge to taste everything that life has to offer – even if you know for certain it is going to leave a bad taste in your mouth.

We try to categorize movies. “It’s a comedy. A romance. A thriller.” Killing Dinner is meant to blur those lines. When I cook dinner, I want it to be funny, sexy, intriguing. In a word: Intense. When I’m Killing Dinner, it should be exactly the same. And I think we did a really good job with this film; letting people know that we really do know what we are doing.

AR: What influence do you think living and filming in New England had on Killing Dinner?

Ganem: I always knew that the story would wind up on the beach. Having grown up in New Hampshire, I have been to Hampton Beach many times. My feature film Losing Jerry is set there. And I knew the exact spot on the beach where the finale of Killing Dinner would take place. It has the perfect wild feel for the action. Simultaneously wide open, yet strangely contained too; with perfect dunes and vistas.

Most of the crew knew each other too, being from the area. There was a fantastic sense of camaraderie and ease amongst us. And when we needed to fill the restaurant for a day of shooting, there was no shortage of people who just wanted to be a part of it all. Working in a community like that really fosters a sense of ‘we are all in this together.’ And it is a great feeling. It makes me want to return to that place and those people again and again.

AR: Were there any particular challenges or rewards to filming in the action/spy thriller genres without a summer blockbuster sized budget?

Ganem: With any film, you start out by saying, ‘This is what I want to do.’ Then there are the conversations about, ‘Well, this is what we have, what we can afford and what we can accomplish in reality.’ There were some special effects’ ideas I had in earlier versions of the script that we realized would open up some potentially serious problems logistically and budgetarily. But really, Killing Dinner is more of a cerebral, witty film than an action adventure (that is, until we make the feature version. Then it will become a cerebral, witty action adventure).

Killing Dinner is a smart movie. The dialogue is witty. The look and feel are cool. We designed camera moves that were ambitious but that we knew we could pull off with our limitations. It all comes down to planning and preparation… Which isn’t to say that surprises don’t happen. It means that we are prepared to handle the surprises. Like when the keys get locked in the picture car. Or when the ceiling catches fire just as you are about to do the biggest shot in the movie. You don’t panic, you just deal with it.

AR: Can you talk a little bit about your title sequence animation? How it was made and what made you decide to include animation?

Ganem: Marc Dole and the genius team at Hatchling Studios in Portsmouth, New Hampshire are responsible for the very cool animation sequence. What they did was basically stylize and visually synopsize the film. And they kicked ass. The way the animation works with Alvin Youngblood Hart’s music really sets a sexy, cool mood and the transition from animation to live action adds another surprising layer of depth to the film. I never want the audience to forget they are watching a film. It is not a TV show. It is not medium shot/close-up. It’s cinematic and everything we did — the animation, camera movement, composition, use of music — is designed in that way.

I wanted Killing Dinner to be smart, challenging and fun. I had a blast making it and I look forward to making many more movies with the same great nefarious gang of lovers, hooligans, friends and winos.

You can find Mitchell P. Ganem’s film Killing Dinner at http://newenglandfilm.com/festival/2010/killingdinner for the duration of the 2010 Online New England Film Festival.

You can find Mitchell P. Ganem’s film Killing Dinner at http://newenglandfilm.com/festival/2010/killingdinner for the duration of the 2010 Online New England Film Festival.