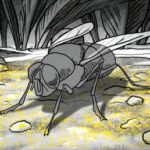 This film save lives. The Story of Cholera is an engaging, educational animation in which a young boy helps a health worker save his father and then guides his village in preventing cholera from spreading. By making the invisible cholera germs visible, this simple animated narrative brings to life the teaching points of cholera prevention.

The Story of Cholera has been used extensively to educate populations in cholera epidemics in both Haiti and West Africa. The film “went viral” among aid agencies in West Africa, experiencing one of the worst cholera epidemics in recent times in summer of 2012. Aid workers said in 4½ minutes the animation brought more understanding and empowerment to local villagers than hours in community meetings. The film has been seen in more than 190 countries and is now narrated in 23 languages with more in the pipeline.

Director(s) Bio:: Born in 1976, Yoni Goodman began his career as an illustrator and designer for Maariv and Haaretz, two major Israeli newspapers. While studying in the Department of Visual Communication at the Bezalel Academy of Art and Design in Jerusalem, Goodman fell in love with animation and hasn’t stopped making it since.
After graduating in 2002, he worked as a freelance animator and illustrator for numerous TV shows and commercials. In 2004, Goodman worked as Director of Animation for Ari Folman’s documentary series, The Material That Love Is Made Of, creating three five-minute animated shorts that were used in the series. Goodman’s successful connection with Ari Folman led to their next collaboration, Waltz with Bashir (2008). Goodman was Director of Animation and developed the Adobe Flash cut-out animation technique needed to create this feature. He was recently working as director of animation for the just finished feature The Futurological Congress.
Goodman has taught animation in the Bezalel Academy of Arts and Design and lives in Israel with his wife Gaya and their children Anat, Itamar, and Noa. He claims to suffer from a mild addiction to chocolate and coffee, which he says he can quit anytime he wants.