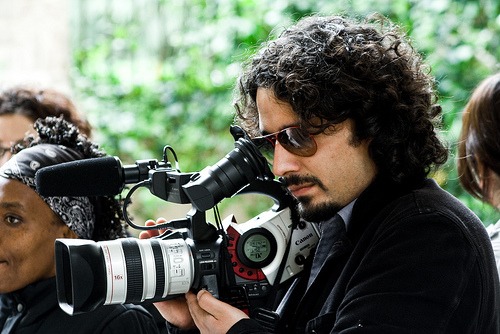 Filmmaking | How To's | New England | Report from the Front

The Director in All of Us

Share
'Everyone wants to direct,' sure, but how does a director think? Here's a bit of advice on interpreting the theme of your story and offering direction to your actors.

What is a film really about? No, not the plot. I’m referring to the emotional through-line, the theme. If you’re going to be a director, then you need to know.

The correct answer is d, letting go. The plot of Nemo, of course, is about a desperate, overprotective clown fish father trying to find his son. ‘I promised that I’d never let anything happen to him!’ Marlin cries. But what does Marlin learn to do by the end of the film? He lets his son go off to school. ‘Bye, son,’ he says. He has learned a lesson. He has learned to let go. Nemo’s theme is about learning to let go. Incidentally, Pixar’s latest opus, Up, is a study of the same theme, but in different clothes.

The theme of the film, what the film is really about, is in the director’s (hopefully) capable hands. The writer writes it, but the director interprets it onscreen for the audience. What’s the theme of The Lord of the Rings? The plot is about a hopeless errand, but the theme is hope.

The director must ensure that the film’s theme is not only interpreted within the construct of the film, but within each scene therein. What is each character doing with regards to the theme? Is he or she moving closer or further away? What is the character actively doing to achieve his/her goals?

My best advice to (fellow) aspiring directors would be to avoid result-based direction. In short, this means avoiding adjective-based discourse with your actors. Telling an actor to play a scene ‘sadly’ doesn’t give the actor a good idea regarding what you want. What is sad? There are hundreds of ways to show sadness. What makes a director a good director is his/her ability to tell which type of sad the actor needs to portray in order to convey the theme of the scene and film itself.

‘Walk into the room crying.’

‘Hang your head and flop down into the armchair.’

‘Sink to your knees and pound your fist on the floor.’

Three ways to show sadness. This is what your actor needs to know. What verbs can you give him/her? What actions should he/she perform? This makes the primary difference between a director who simply directs and a director who is in touch with a screenplay’s theme.

George Lucas legendarily gives two directives (and two directives only) to his actors: ‘Faster’ and ‘More intense.’ What’s wrong with asking an actor to give it more intensity or less intensity? Well, what exactly do you mean by intensity? Is the actor overacting? Are you asking them to emphasize a droll performance? They won’t know, either.

Telling an actor, ‘She has a great relationship with her coworkers’ isn’t enough. Instead say, ‘She buys her coworkers lunch once a week and allows them to dress down on Fridays.’ This creates an image for your actors from which to play off, a specific character, who (hopefully) reflects the theme of your film, or at least advances its cause.

Don’t say, ‘Drink the expired juice and be disgusted.’ Instead, try, ‘Spit out the juice as if you were told that it was orange juice but it’s really 3-month-old milk.’ It’s a concrete image, and it’s one off of which your actors should be able to play.

Ultimately, telling your actors to do something, rather than be something is the best way to communicate what sort of performance you’re after, but also demonstrates familiarity and confidence with the themes inherent within the screenplay. What does the character want and what is he/she doing to obtain it? A director who knows the answer to this question is already ahead of the curve.