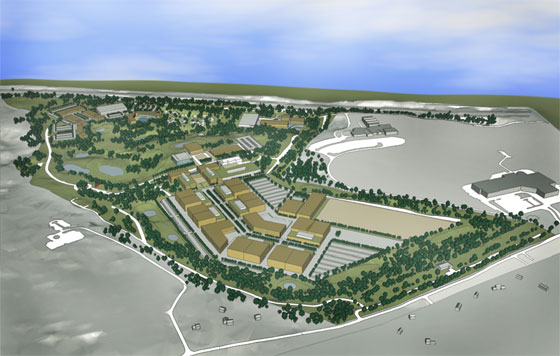 Lights. Camera. New England. An Update on the Studios in the Region

Share
Think the studio scene is DOA in New England? Don't pack your bags for Hollywood just yet. Here's a status report on each of the studios planned for the region.

Here’s a status report from our February 2009 update on the studios across New England.

In previous articles, NewEnglandFilm.com has covered the proposed Plymouth Rock Studios (PRS). Due to the economic downturn as well as an investigation by Massachusetts Secretary of State Bill Galvin regarding PRS incorporation papers, the project appears to be indefinitely, if not permanently, grounded.

Hollywood East/Area 51, like PRS, is another self-contained studio – sound stages, offices, hotels, restaurant – think Universal or MGM – that has also appeared in previous NewEnglandFilm.com updates. The proposed location was an abandoned army engine plant in Stratford, Connecticut. The project, headed by Alan Christopher, a former chairman of the now defunct Connecticut Film and Television Commission, ran into a series of unfortunate legal disputes. Christopher has since left the original investment group, and has announced a new project with new investors. This proposed studio, smaller but also located in Stratford, at a former Exxon Mobile plant, will be called Dogstar Studios. (http://www.dogstarmg.com)

A third self-contained studio covered in past updates was originally going to be built in Hopkinton, Rhode Island. A joint venture between California’s Pacifica Ventures and Providence’s Halden Acquisition Group, LLC, backers decided to forgo Hopkinton when the RI general assembly failed to pass legislation that would give the company tax breaks equal to twenty percent of construction costs. The proposed 495,000 square foot studio has now moved to South Windsor, CT – hence the name change to Connecticut Studios LLC. The studio’s website projects construction to start in March 2010. (http://www.ctstudiosllc.com)

The fourth studio covered in previous updates, but yet to break ground, is SouthField Studios-Boston, proposed by International Studio Group (ISG). The studio would be located onsite at the former South Weymouth Naval Air Base. The plans for the studio include 11 sound stages on 30 acres, with an interactive film and television tour so that guests can see how media production is done. The studio’s website (http://www.southfield.com/studios2.html) lists the facility’s groundbreaking on a timeline for 2009. Other press releases have quoted ISG executives as saying that groundbreaking would take place in November 2009, with full-scale construction slated for spring of 2010.

A need for bigger studios?

The recent media attention has generated plenty of dialogue among New England’s filmmaking community. Not everyone agrees that the path to New England’s media success includes the construction of these proposed multi-faceted studios. Some, like filmmaker Jean-Paul Ouellette, have felt compelled to comment publicly about the debate.

Ouellette, founder of Yankee Classic Pictures, has been in the film business for thirty plus years, fifteen of them spent in Los Angeles. He shared with NewEnglandFilm.com that he senses the frustration of his peers, and the desire for the region’s film industry to accelerate quickly. He says, “Sadly, it doesn’t work that way. It takes time to build up success.” Ouellette also feels that the huge, self-contained studios are not what are needed in New England. “The activity isn’t here. We have to have enough activity to sustain these facilities when Hollywood isn’t using them. We just are not there yet.”

He feels that smaller studios, or soundstages, make more sense and that the most important element is the location of where these facilities are built – the convenience of getting to the location, major highways, and airports. He cites High Output (http://www.highoutput.com), located in Canton MA, as a perfect example of the type of facility that will work for this area.

Matt Newton, Director of the New Hampshire Film and Television Office, echoes the same sentiments as Ouellette. He feels that it’s more prudent to proceed slowly and cautiously, and work to support the many talented independent filmmakers in the region.

The plethora of existing studios in New England

The Franklin Business Center, located in Franklin, NH, is owned by the Mass Investment Group. According to owner Alex Gorelik, the facility offers 186,000 square feet of soundstage, as well as many other site locations – multiple rooms for office and apartments, a warehouse with twenty-five foot ceilings, a large basement, loading docks, and a freight elevator. The center offers all pre- and post-production facilities for independent filmmakers. (http://massinvestmentgroup.com/film_studio_space.html)

In August, Maine Studios opened its doors in Portland. According to founder John E. Seymore, the facility offers three separate studios, with a total of 43,000 square feet. The facility also boasts ownership of one of the ten largest green screens in the world. “The goal here,” says Seymore, “is to create an infrastructure that will put people to work.” Seymore is excited by the future activities planned for the location. This March 12-13th, the studio will be hosting the New England Independent Film Expo (http://www.newenglandfilmexpo.com). The expo is offering film screening consultations, distribution workshops and networking opportunities. Maine Studios will also be hosting the United States stop of the LaHore International Children’s Film Festival – beating out Los Angeles as the festival’s host city. And Seymore hints at a still-to-come announcement regarding a major studio’s utilization of the facility in the near future.

Another facility planned for South Portland is the Fore Rivers Soundstage, operated by Native Son Productions, LLC. Eric Matheson, a Cape Elizabeth resident, is the man behind the project to turn an abandoned, city-owned National Guard armory into a sound stage. He has been active in the film business for forty years and his resume includes work on films such as Ghosts of Girlfriends Past, The Cider House Rules, Amistad, and The Man Without a Face.

He has been developing this project for some time, and is pleased with the response from the city of South Portland. “The city is very excited and supportive of the project,” says Matheson. They are currently negotiating a lease and have also been successful in having the area rezoned from residential to commercial. Matheson says the building will also offer production offices and rooms, screening rooms, and still photography studios.

Both Seymour and Matheson see their facilities not as competitors, but as film collaborators. Maybe instead of New England changing its name to “Hollywood East,” we should set the standard so Hollywood wants to be called “New England West.’