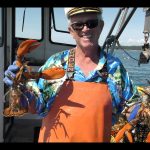 Uncle and Nephew and next door neighbors, Bobby and Sonny Warren recollect a lifetime at sea, fishing for lobsters off the remote island of Vinalhaven, Maine. Dispelling the myth that lobstermen overfish, they shed light on their sustainable practice while revealing their wonderfully altruistic nature. As long standing, respected members of the community, their stories serve as an important chapter in Vinalhaven’s fascinating history.

New England Connection: Our family has a home on the lovely island of Vinalhaven, ME. This is where I met Sonny 20 years ago. Ever summer when I returned to Vinalhaven, I would chat with Sonny and was so compelled by his stories that I knew one day I would want to preserve some of them on film.

Director(s) Bio:: Chalkley Calderwood is a creative director and video director with a demonstrated ability to ideate, create and launch strategic creative projects for media and marketing brands. In 2014, Calderwood earned her documentary filmmaking certificate at the National Film and Television School in Beaconsfield, England. Her NFTS documentary short ‘DIG’ has been an official selection in several festivals in the U.S. and U.K.. She lives and works in Brooklyn.