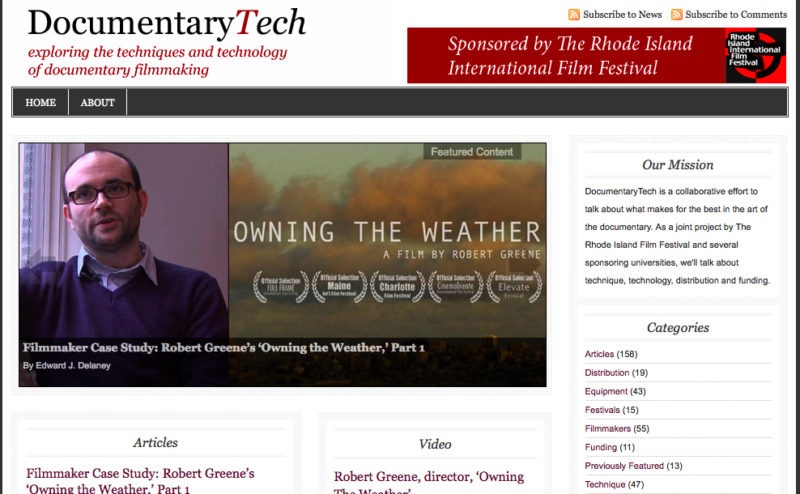 Share
DocumentaryTech aims to be a focal point for aspiring documentary filmmakers, both new and seasoned.

The site describes itself as an “open-source collaborative project exploring documentary filmmaking techniques and technology” with a very specific mission: “DocumentaryTech is a collaborative effort to talk about what makes for the best in the art of the documentary. As a joint project by The Rhode Island Film Festival and several sponsoring universities, we’ll talk about technique, technology, distribution and funding.”

Since it is an open discussion board, there are a variety of different authors posting articles on the site. These are arranged according to categories ranging from articles about field production, specific areas of interest, filmmaker profiles, equipment and technology, and festivals, funding and distribution. The format of the website is very straightforward so finding articles covering the specifics of your documentary inquires is easy.

The site also has a category specific to user-submitted videos. There you can watch interviews with people in the field and even watch trailers and shorts. These exhibit the techniques and ideas of both leaders and beginners in the field. The website seems geared mostly to independent filmmakers, and many of the videos and supplemental information seems targeted towards novice artists. Still it is a great way to watch the work of others with similar interests.

Since it is an international site and not geared to a specific region, the articles on technology and equipment cover the actual tools and techniques used versus being a database of equipment rental or purchase places as is the case with more localized sites. The site also stays abreast of current news and technology. In just a quick perusal through some of the categories, I found great articles on such topics as “If it is about something that isn’t true, is it a documentary?” which I found very well-written and enlightening, and articles with questions about new camcorders and other equipment needed by any independent filmmaker, not just those making documentaries.

Three men with a wide range of experience moderate the site. They are Kurt W. Lancaster, an assistant professor at the School of Communication at Northern Arizona University; George T. Marshall, the founder and producing director of the Flickers Arts Collaborative which among other things produces the Rhode Island International Film Festival; and Edward J. Delaney, an author and filmmaker who has written books such as Warp & Weft which won the 2005 PEN/Winship Award and has directed the documentary The Times Were Never So Bad: The Life of Andre Dubus (2007).

If you possess an interest in documentary filmmaking or if you are an independent filmmaker regardless of experience, the site is a great way to keep your fingers on the pulse of documentary aesthetics and technology news.