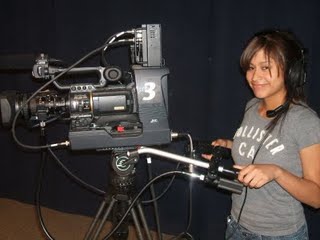 Somerville Community Access Television (SCAT) introduces teenagers to the world of video production through a unique program called Next Generation Producers. Under the guidance of coordinators/instructors Daniel Marque and Prince Charles, the program offers year-round training in all aspects of video production for teens from Somerville and neighboring communities.

Some high schools have their own video production studios and student programs air on a high school or education-only cable station; these schools may even offer credit for media classes. Somerville High School is one of few such programs in the region. Yet its limited school-year calendar can leave would-be filmmakers wanting more. That’s why many Somerville-area students find themselves drawn to Next Generation Producers. Organizations such as the Boys and Girls Club, Girls to Women, or Somerville Cares About Prevention (SCAP) partner with SCAT to provide youth participants with media education. Surrounding towns and cities offer similar programs but according to Marque and Charles, SCAT’s program, “sets itself apart.”

Running throughout the calendar year, Next Generation Producers offers four-week intensive courses to a ten-plus week submersion. Marque and Charles explained that for both programs, students learn everything from preproduction to postproduction, culminating with individual finished products. The resulting student videos range from animation to documentaries or music videos — anything the students can imagine.

Next Generation Producers doesn’t stop with practical skill building such as using the camera, producing, and editing. The program also includes informal lectures on subjects ranging from film vocabulary (director cues and camera angles and directions) to the use of stereotypes in film and video, or how to deconstruct, analyze, and critique the media messages they encounter in their daily lives. Next Generation Producers also focuses on how to use mass media to create positive messages for the community. Field trips to places such as Emerson College allow students to see what a future education in filmmaking might offer. According to Marque, this kind of role modeling has had an impact on a few of the students who have gone on to study production at places such as Bunker Hill Community College.

Anthony Soto, a Somerville High senior, became interested in the program when Charles came to his high school to recruit students. Soto joined and called the lessons he has learned “invaluable.” “Now when I watch TV or movies I know why they are doing what they do,” he said. Soto made a documentary about the Rasta culture and the misconceptions surrounding it. It took him a couple of months and one screening included a performance of Rasta music.

Linda Chau, also a Somerville High student, has been involved with the Next Generation Producers for more than two years. She joined through SCAP and said that she prefers to be behind the camera and involved in postproduction, though she admitted, “editing can be difficult.” Most recently, she helped produce two PSAs, including one that dealt with marijuana use among teens. The other dealt with depression. She said seeing the blooper reel at Somerville Theatre was one of the program’s highlights. Chau’s participation (like all SCAP participants) included a stipend, which she considers a benefit. “It is almost like a summer job with volunteer credit,” she said.

In a typical year, at least seven different organizations participate in Next Generation Producers. Some students pay a fee to the nonprofit, which then pays a fee to SCAT. Some students receive a stipend. Each scenario depends on the partnership between SCAT and the other youth-serving organizations. The projects produced can vary for each organization but the partnership with SCAP focuses on producing Public Service Announcements (PSAs), for example.

To celebrate the students’ achievements, Marque and Charles plan frequent public screenings of student work at Somerville Theatre in Davis Square. At these events students show off what they have created to friends and family (or in my case a stranger who wants to see what new bright talent is out there). They receive certificates of completion and get a chance to win door prizes.

Now in its third year, the program is expanding its partnerships, including collaborating with the towns of Malden and Everett (among others) and bringing Next Generation Producers into Somerville High School for a broader immersion. This coming school year they are looking for more students to graduate and hopefully pick up more awards. SCAT has already won best overall cable station (from the Alliance of Community Media) and one of the Next Generation Producers participants picked up honors for her documentary.

Both Soto and Chau said that if the opportunity arises in the future, they would like to continue using their producing skills learned at SCAT.

Learn more about Next Generation Producers and see past projects by visiting www.nextgenerationproducers.blogspot.com. Contact SCAT directly at www.access-scat.org. If you are not a Somerville resident you might want to contact your own town or city; if you are a student or run a teen group, ask if they offer similar programs. If not, you could always start one up.

Learn more about Next Generation Producers and see past projects by visiting www.nextgenerationproducers.blogspot.com. Contact SCAT directly at www.access-scat.org. If you are not a Somerville resident you might want to contact your own town or city; if you are a student or run a teen group, ask if they offer similar programs. If not, you could always start one up.