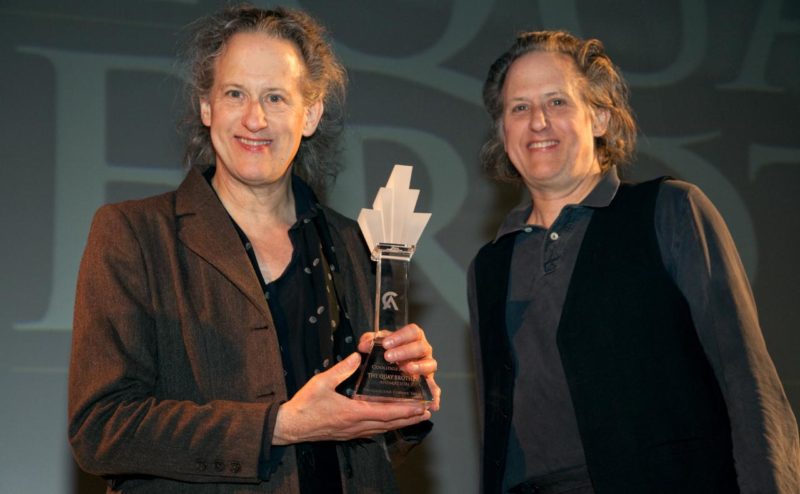 Under the Animation Microscope

Share
Mike Sullivan distills what makes the Quay brothers worth watching, and worthy recipients of the 2009 Coolidge Award, even if it is hard to tell them apart.

Film runs at 24 frames-per-second. Now, let’s say you intend to produce a stop-motion animated film that runs a mere 20 minutes. That is 1,200 seconds, which translates to independently moving each and every animated moment, shot by shot, almost 29,000 times! There aren’t many who would willingly take on that challenge. You must have a profusion of passion for the art as well as the patience of Job.

Independent filmmakers and animators Stephen and Timothy Quay, better known as the Quay Brothers, have both. The brothers have been creating their own stop-motion animated films for more than 40 years. Each project features the brothers’ singular style and their particular perspective on the world. More than a few of them feature puppets with hollow heads.

You have probably seen their work and just didn’t know it. In addition to their own movies, the brothers animated the dream sequence in 2002’s Frida, they have done music videos for Peter Gabriel, Michael Penn, His Name Is Alive and other bands and musicians, plus they have done numerous TV commercials. Their influence can be seen in the animated work of Tim Burton, Henry Selick and Terry Gilliam. Gilliam even called their film Streets of Crocodiles one of the ten-best animated films of all time.

Originally from Pennsylvania, the identical twins moved to London in 1969 after graduating from the Philadelphia College of Art (now The University of the Arts). In London they found a home for their diacritic approach to animated filmmaking. “America will buy the work,” the twins said the night of the Coolidge celebration, “but they won’t commission the work. Except for commercials.” The Quays have remained in London ever since, creating their own worlds of darkness and light, real and un-real, perception and sound. Their films do not tell stories with traditional narrative structure. Instead, they use sound effects and music, color and shadow to explore their themes of “death, decay, and nothingness.”

In addition to photographing their own films, the brothers also build the sets, or the worlds their characters inhabit. Some of these sets were displayed as part of a separate exhibit called “Dormitorium: An Exhibition of Film Decors by the Quay Brothers” that ran in conjunction with the Coolidge Award events. The sets are works of art in and of themselves, nightmarish and fantastical at the same time. Staggering detail lives in every corner. One particular set drew me back again and again. It was the set for Rehearsals of Extinct Anatomies – O Inevitable Fatum (1987) and I swear the puppet therein — created from an abused doll’s head and a torso of black wires, twisted and curling — changed each time I returned to it. It was watching. Waiting for me. Such is the impression the brothers’ work leaves behind.

The night of the award ceremony was an interesting one. The Quays may not have the celebrity of a Streep or Yimou, but the line waiting to get into the show stretched around the back of the theater. Of course there were the requisite film- and art-school students, beret-wearing artists and more than one girl who had transformed a car seatbelt into a pants belt. There were also many “regular” people, people of various ages who enjoy a different kind of filmmaking. Surprisingly, the brothers themselves fell into the latter category. They seemed like regular guys.

Not once were they referred to by their first names. They were always The Quay Brothers, the Quays, the Brothers, the Twins. I can only tell you their names (Stephen and Timothy) because it was printed on the program. Don’t ask me which was which, all I can say is that one had longer hair. After the obligatory introductory speeches the fun began with a montage of some the Quays’ work cut together by their long-time editor and sound-designer Larry Sider. The twins’ colleague and friend, well-known art critic and academic Thyrza Nichols Goodeve, introduced them to the crowd. As they came onstage I sensed a profound sense of humility from them. They seemed genuinely proud and honored that so many people had come out to celebrate the years of sweat and tears they had given to the world of filmmaking and animation.

Joined onstage by Goodeve and Sider, the brothers sat and spoke about their own processes in making their films. Although I wish there had been a more focused Q & A, there were still many cool and unexpected tidbits. For example, they often use European literature and novels as inspiration, however one of them revealed that, “Our films follow musical laws. If our films followed dramaturgical laws we would fail.”

The Quays always get their music for the film done first, before they start animating. They listen to the music until “it gets transmitted into the fingers.” Then they begin animating. They call their studio a “genuine laboratory.” (Their time living in England was evident in that word. They pronounced it “la-BOR-a-tree.”) I was shocked to hear that they dive into the animation process without a detailed shot list or anything like that. Maybe I’ve seen too many Pixar DVD behind-the-scenes documentaries. “We never pretend to know what we’re doing,” Timothy (or Stephen) said. The word “intuitive” came up more than once.

Personally, as a documentary editor, I completely understand finding your music first and building your story around the beats and rhythm, but to go through the pain-staking, laborious process of stop-motion animation and then decide later on that it is not working? I would go nuts. Especially shooting film. Imagine shooting one stop-motion shot for a week or more, waiting for the film to be processed and only then finding out the shot doesn’t cut correctly into the show? Maddening.

I have purposely stayed away from trying to describe the Quay films themselves. Even Goodeve, in her introductory remarks, said, “The Quays make something that I can’t describe.” And she’s their friend. The work of the Quay brothers needs to be seen. To be heard. Words on the page (or the screen) cannot do them justice. Seek out the work of The Quay brothers. You will be glad you did.