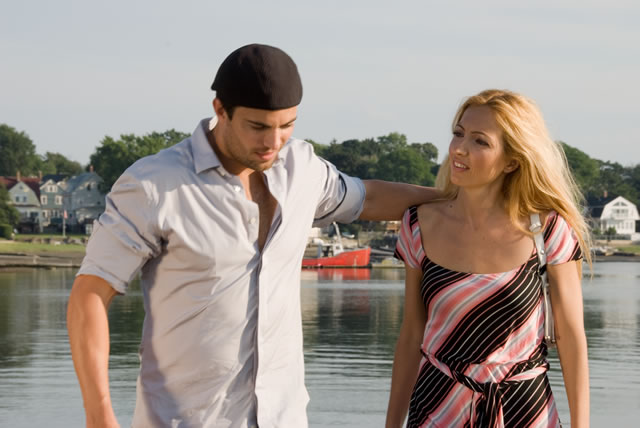 Any aspiring actor probably has experienced the following: You get a part, learn your lines, show up on time, take your work seriously and do everything that is expected of you and then….nothing. I don’t mean nothing as in no instant fame and fortune, but nothing as in the damn thing never got finished. The director moved to Florida, the producer got pregnant, somebody ran out of money, somebody else had their car stolen etc., etc., etc.

This happened one too many times to Bostonian Elika Portnoy but instead of giving up and going back to her day job, she says, “I figured, why don’t I do it myself?” Not that her day job was that bad — she was already a successful model and businesswoman, but, she says, she had stories to tell so she took control of her destiny. Months later she accepted the Best Actress Award at the Monaco Film Festival.

The Bulgarian-born Portnoy says the idea for Tricks of a Woman, which also won Best Picture at the Monaco Film Festival, came to her in a dream. The film depicts an ordinary girl working as a fishmonger when she unknowingly becomes embroiled in a wager between two high fashion photographers played by Scott Elrod and Carlos Leon (the latter won Best Supporting Actor at the Monaco Film Festival). Detecting a pattern yet? The bet is that Elrod’s character can make a supermodel out of any woman he sees. Of course he chooses is Portnoy’s character, who is then transformed in a Pygmalion sort of way, from the duckling into the swan.

Portnoy developed the script on her own then involved another local, director Todd Norwood. Portnoy says Norwood “brought a lot more humor” than was originally in the script and added supporting characters played by veteran Hollywood performers Vincent Pastore and Natasha Lyonne, who won Best Supporting Actress at the Monaco Film Festival. This is Norwood’s second film; his first, The Wayfarers, also depicted a New England fishing community. The mix of blue-collar life with the glamorous world of clothing animates Tricks of a Woman or as Portnoy says, “it contrasts fishing and fashion.”

The film was shot in and around Boston and received generous support from local businesses. Often, vendors were pleased to donate their services to the production. Portnoy says the fun was “being able to tell a story and communicate with the world.” But despite the cargo load of awards, the film has yet to secure an American distributor. Several other film festivals are on tap so there’s still a good chance Tricks of a Woman will be seen locally. It certainly has the backing of the Monaco judges. Portnoy’s advice to other aspiring filmmakers that want to follow in her footsteps is to “keep focused, aim at the goal and move ahead.”

More information about the film can be found at www.mutressamovies.com.

More information about the film can be found at www.mutressamovies.com.