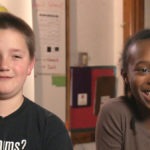 Elementary school children from Massachusetts and Alabama describe what they know about gays and lesbians, what they hear at school, and what they’d like teachers to do. This 13 minute film was produced by Welcoming Schools, a project of the Human Rights Campaign Foundation. What do you know? has played in festivals and schools around the world. To order you own DVD, which is closed-captioned, Spanish subtitled, and comes with a teacher’s guide on the DVD, please click here, where you can also learn more about the Welcoming Schools program and their nationwide trainers.

Director(s) Bio:: Ellen Brodsky began filmmaking in 1995 after a 10-year career in education and public health. She directed the award winning short Only One Boss, and co-directed the award-winning short Dental Farmer. She is the co-producer of At Home in Utopia, which was broadcast on the PBS series Independent Lens in 2009. In 2008, she worked as the media consultant for the LEF Foundation’s Moving Image Fund. Outside of film, Brodsky has led a national training center on HIV prevention for the CDC, directed sexuality education programs in over 40 school districts, taught English in the Congo and has worked as a teaching assistant at Harvard University for classes on sexuality and positive psychology. She lives in Cambridge, MA with her two teenage daughters and her husband. 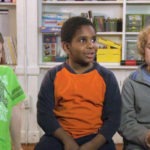