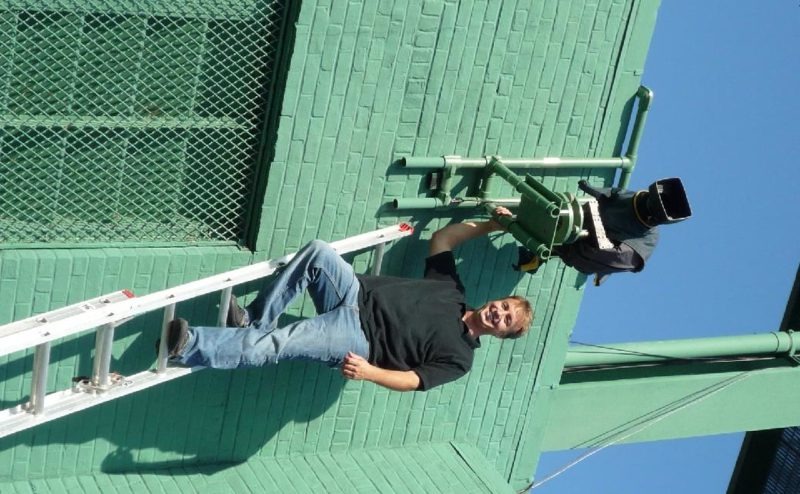 Filmmaking | How to Be a... | Interviews | Local Industry

How to be a… Sports Camera Operator

Share
Michael Porta has found a niche in remote broadcast television, which can be a launching pad for other creative projects.

He’s been to more than 1,000 MLB games, 500 NHL games and 500 NBA games plus 35 Nascar races.  And he’s never once sat behind a post, in the nosebleed section or next to an obnoxious drunk with BO, cheering for the Yankees.  His name is Michael Porta and he is a camera operator/technician for remote television broadcasts.

Set your wayback machine for the early ’90s.  Television sports coverage was growing and changing faster than teenagers between 7th and 8th grade.  ESPN now had Major League Baseball, FoxSports had the NFL, and NESN was the home of the Boston Red Sox and Boston Bruins.  That’s when Porta returned to New England after some post-college living in Colorado.

While in the Centennial State, Porta had been working for Colorado Film and Television Studios.  There he was trained for TV and video, lighting, and camera work.  He also got his start on multi-camera remote broadcasts.  When he came home to New England, Michael found that there was plenty of work in sports broadcasting for an experienced camera operator with the proper attitude.

The broadcast TV world had been fractured with more and more cable channels and streaming video on the web, but loyal fans would still tune in again and again to watch their teams succeed or fail. So professional sports were one of the few avenues left where the all-important advertisers could count on a certain number of eyeballs.  Better broadcasts led to higher ratings, which led to more income for the networks that carry the games, which lea to bigger budgets for the broadcasts, which led to more technology to create the broadcast, which led to…Can you sense a pattern here?  Viewers’ tastes were also changing. They demanded bigger and better coverage. “That meant more cameras and tape machines to cover the game the way people demand to see it,” said Porta.  I spoke with him for a bit in September.

Broadcasting professional sports today basically works like this: the network buys the rights to televise the team or sport.  Then, for each game, they lease all the equipment needed to make the broadcast and hire freelancers to operate that equipment.  Except for a producer or two, nobody actually works for the network.  That is a bit simplified, but one thing is for sure: this business is a freelance operation.  Anyone looking to get into remote broadcast work must realize that.

But, what does the camera operator do?  “I cover the sport the best I can.  I cover each play the best I can.”  Porta’s main clients include NESN (Red Sox and Bruins), ESPN, Nascar, FoxSportsNet and the Celtics visitor shows.  Each broadcast uses separate crews for the home teams and the visitor teams.  That means that if the Celtics are playing the Supersonics, the viewers in Seattle are seeing Porta’s work but not the Boston viewers.  Porta also works on the Esplanade for the annual Fourth of July extravaganza as well as for poker tournaments, tennis matches, concerts, debates, and many other types of events.

For the Sox games, Porta operates camera four. That’s the view behind the pitcher that covers each pitch live.  What happens with that pitch is what dictates his next shot.  Once again, that is a simplified explanation.  “We’re not just sitting there, turning the camera around shooting whatever we can see,” he explained. Based on the needs of the sport, every camera has its own specific assignments for each play.  Whether it’s a home run, a goal, or a fast break, each camera covering the event has a task and it’s the same each time for each situation.  For example, if a goal is scored in hockey, one camera will always shoot the coach who got scored on, another camera will always shoot the “goat” (the player that got burned — just one of the many new terms I learned from Porta).  The good camera operators all know their tasks and assignments so the director can call for a specific camera at any time and know that the operator has the shot.

Besides HDTV, the robotic camera may be the most important tool for effectively documenting sporting events since the instant replay.  Robotic cameras are able to get angles that a manned camera cannot:  just above the hoop in a basketball stadium for instance, or hanging from the main scoreboard in the Garden, atop the net behind home plate in Fenway or traveling along a wire above the football field.  Currently, the Red Sox and NESN like to have cameras with a wider lens down low, giving a more straight-on view of the game.  This, plus the enhanced 16×9 picture from HD, allows the viewer at home to see things from a different perspective and to experience the game in new and exciting ways.  Not everybody is happy about these new angles and perspectives, but what did Abe Lincoln say about pleasing all of the people all of the time (or was it fool all the people)?Anyway, like it or not, as long as there are new toys to play with there will be new ways to broadcast a game.

Recently, Porta worked a camera that employed new “Ultra-Mo” technology during the Pilot Pen Tennis Tournament in New Haven, CT.  The camera has a variable frame rate and during the match, with plenty of sunlight, it was running at an amazing 1,100 frames-per-second.  For comparison, the traditional super-slo-mo replays we see during games run at 90 fps.  With the Ultra-Mo at 1,100 fps, “you can see the flex of the racket, the ball squish, the felt coming off the ball.  You really see a lot,” he said.

On occasion, Porta utilizes his camera skills on other video projects.  He shot footage for an educational video for the Ocular Immunology and Uveitis Foundation, for example.  A different project had him in the apartment of a hoarder, bursting at the seems with yard-sale type stuff.  "It was just one of those times that camerawork puts you in places and gives you exposure to things that you might go your whole life never seeing or experiencing," he said.

The best advice he would give someone today is to "shoot some of your own creative stuff and put it on your own website."  One of his colleagues, Tom Guilmette has received a ton of calls since creating his site.  Porta also suggests that those in college at a Division I school should contact the sports information director and alert them to an interest in shooting sports.  "Tell him you want to work for ESPN as a utility or a runner…ESPN often gets students to do some of the grunt work on game days, it can be fun and you meet a lot of connected people in the field."

Though some may think it exciting or, dare I say, glamorous, Porta is very humble about his job. “It’s certainly not drudgery, but it is a job,” he observed.  When I asked him what he has shot that makes him the most proud I was expecting something "sporty" involving stats or a rare athletic feat.  I was surprised by the answer.  “What’s most fun to capture is human emotion.  Someone winning or losing, when you are trying to show the viewer what this person is feeling at this time.  It is fun to shoot human emotion and the human condition.”  Lucky for him, New England sports have had quite a bit of that in the past few years.

Related Image: HDTV has revolutionized how sports are broadcast.