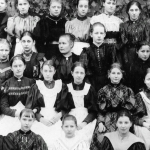 The film follows America’s pioneering women rabbis as they travel to Berlin and Terezin with a special delegation of American Jewish historians, rabbis, and communal leaders to rescue Regina Jonas, the first woman to be ordained as a Rabbi, from the oblivion of the Holocaust.

New England Connection: Several members of the special delegation whose trip the film documents are from the Boston area. The film was produced by the Jewish Women's Archive (JWA) and directed by JWA's founding director Gail Twersky Reimer. Consulting Director Julie Mallozzi is also Boston based.

Director(s) Bio:: Gail Twersky Reimer is the former executive director of the Jewish Women’s Archive, the Brookline based national not-for-profit organization she founded in 1995 to document and make known the stories, struggles, and achievements of Jewish women, both celebrated and unheralded. Reimer led the organization for its first two decades, initiating plans for its pioneering digital archive, award winning oral history projects, and widely used educational programs. In 2004 she produced "Making Trouble", JWA’s film on Jewish women comedians, and in 2014 produced and directed "In the Footsteps of Regina Jonas."