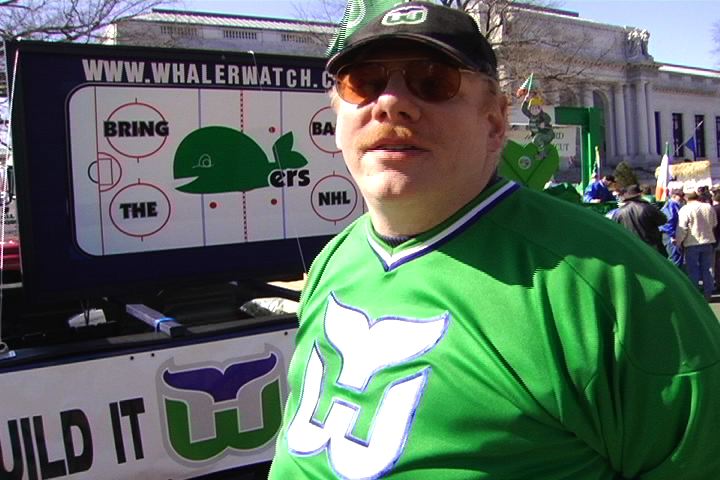 Left Out In The Cold, For Now

In New England, you can’t turn the corner without running into a member of Red Sox Nation.  They are a loyal bunch.  But they’ve got nothing on Hartford Whalers fans, according to filmmaker Kevin Massicotte.  “It’s more like the Rocky Horror Picture Show crowd.”

From 1975-1997, Hartford was home to the Whalers, the National Hockey League (NHL) team named for the Connecticut state animal.  But the real animal came after they left to become the Carolina Hurricanes.  A movement was started to bring the Whalers back — or at the very least bring a new stadium back — to their fair city.  “You have people that are really into it and know every statistic and you have others that know nothing, but they all feel a common sense of camaraderie because of their love for their long absent team,” said Massicotte.  This community that prides itself in its membership of exclusivity was a perfect focal point for a story, thought Massicotte.

Massicotte is originally from East Hartford, about a half mile from the Hartford Civic Center and about a mile over the river.  He has always been a Whalers fan and felt that his love for both the Whalers and documentary filmmaking could form a sort of marriage.  He graduated with a BA from Emerson College and went on to attend the Center for Digital Arts in Waltham, MA.  With a running time of 20 minutes, Bleeding Green is his first project as producer and director.

Scott Caseley:  Your title, Bleeding Green refers to a very unique group of people who share the same passion, a love for a former World Hockey Association and NHL team the Hartford Whalers, which left New England almost 12 years ago.  Why the interest in this topic all these years later?

Kevin Massicotte:  When I started it, it was closing in on the ten-year anniversary, the winter of 2007.  When you’re coming up on a milestone like that, it’s always interesting to look back.  I was really interested in what other people who were avid Whalers fans have done in the absence of the team and what they are doing now.  Once I found out about the Boosters, and their attempts to bring a team back to Hartford, that fleshed out the story for me.  I think the dynamic thing was trying to bring a team back.  And, I wanted to try to document that.

SC:  How did you first meet and later get the Boosters involved with your documentary?

Massicotte: My brother told me about their website, because he’s as huge a Whaler fan as I am, and I emailed them and things kind of went from there.  It was pretty easy, there wasn’t a lot of convincing.  They appreciate any kind of attention that they can get for the team and keep the Whalers alive.  It really didn’t take much to get them to say yes.

SC:  Was there anything in particular that surprised you about the Hartford Whalers’ Boosters, or the team itself?

Massicotte:  If there’s one thing that surprised me about the Boosters, it was that there are a lot of women in this club.  Looking back on it, I don’t think I gave them enough face time.  Diane, wife of the Boosters vice president Marty Evtushek, is a member even though she never went to a game.

SC:  How big of a crew did you have for your project?  Did this help or hinder the creative process?

Massicotte:  I am a one-man band, completely independent, in the extreme.  Nobody aided me on any of these shoots.  It was all me.  I set up the lights, yeah, I did everything.  There was no shooting crew per se.  I was the shooting crew.

SC:  What was your production budget?  How were the funds raised?

Massicotte:  My parents financed it for me.  The budget was the cost of miniDV tapes; I got the camera for free because I was in school at the time.  Production gear just had to be picked up at the school’s equipment room.  And if I had to put to put a figure on it, it would be at most $600.

SC:  When taking on a topic such as this with so many different interviews, how intricate and important was the pre-production process?

Massicotte:   I didn’t do any pre-production at all.  I just dove head first into it.  It was totally fly by the seat of your pants.  I contacted the Boosters to see what was going on, and once I got their permission to film, I just figured now’s my chance to make it into something.

SC:  How many days were in your production schedule?

Massicotte:  I put in between 400-450 days.  They meet monthly, so it took time.  I was with it for over a year.  I had to keep in contact with them to see when they were going to do something and try to get access to it.

SC:  What sort of camera(s) did you shoot the project on?

SC:   What did you use to edit the documentary on, and where were the editing facilities?

Massicotte:  Final Cut Pro 5.1 on my laptop.  The editing facilities were my living room.

SC:  Throughout the film, you use The Brass Bonanza, the theme song of the Hartford Whalers, why do you feel it was so important to play it over and over again rather than just once?

SC: You used an interesting effect over your shots showing the birth of the Hartford Whalers hockey in 1975.  Could you briefly describe what this was and why you chose to use it?

Massicotte:  I got an old tape from the Boosters club of the last game.  It was sort of a retrospective.  I saw those clips and thought they needed to be in there.  That effect was already on there.  That wasn’t me, that was Sports Channel.

SC:  How has your film been received by the subjects, the Hartford Whalers’ Boosters?

Massicotte:  They all love it.  They all love it.  I was very afraid about that too.  I don’t want them to feel like I was trying to humiliate or denigrate them in any way.  There was a lot of humorous things that people who were not attached to the team would laugh at.  They continue to receive it very well.

SC:  What is the current status on their drive to bring back the team or build a new arena?

Massicotte:  They are trying to wait out the election year, since the legislative session is already done.  They think that it will come down to the 2009 session.  And, they are working on a petition to make it a public issue, so that ideally a new arena will be built.

Massicotte:  I’m going to try to make this into a feature and try to raise the production value of it.  I’d love to have people work on it hopefully with money.  Regardless of what happens, I’ll continue on it, no matter what, as a labor of love.

Visit www.BleedingGreenmovie.com for upcoming festival screenings.  The next one is on September 13th at the Southern New England Film Festival, and then at the Newburyport Documentary Film Festival on September 28th.