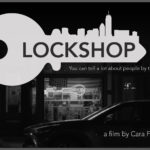 A South Boston locksmith has existed for a century. Small shops like hers used to line the neighborhood; now, it’s among the last.

New England Connection: Cara lives and works as a journalist and filmmaker in Boston. "Lockshop" is about a locksmith working in a century-old, family-owned, two-room shop in South Boston.

Director(s) Bio:: Cara Feinberg is a writer and filmmaker living in the Boston area. Her work has appeared in print, online, and on screen, and she currently works as a producer for the PBS science series NOVA. Cara's print stories have appeared in publications including The Boston Globe, The Atlantic Online, The American Prospect, and Harvard Magazine, and she has worked on television documentaries for PBS, the Discovery Science Channel, the Travel Channel, and DreamWorks Animation.