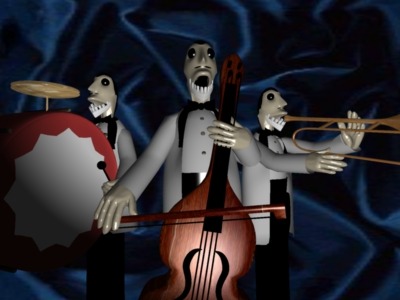 Share
S.A. Bouchard ruminates on the patience required to make five seconds of animation and the artistic process in general. His short screens this month at SNOB.
S.A. Bouchard is used to hearing two complaints about his animation films: they move slowly and raise more questions than they answer.

Bouchard doesn’t mind.  Weaned on foreign films, the semi-retired artist believes in the slow and deliberate unfolding of a story… and, for that matter, a life.

“A lot of people complain about the pacing, but it’s the pace of my life.  I like to pay attention,” he said.  “Life is more important than racing around.  Attention needs to be paid to life.  I get so baffled by people moving so fast that they’re not living their own lives,” he said.

As far as his films raising more questions than they answer, Bouchard doesn’t necessarily believe he has answers to share.

“An early exposure to foreign cinema was most influential to my style of filmmaking,” he said.  “European filmmakers are quite comfortable with allowing a story to unfold at its own pace, and they also eschew any pathological need to wrap things up in a nice neat bow.  They understand that life is a messy business.”

Bouchard’s new 19-minute animation short, Emmaline (who lived by the sea), deals with isolation and separateness between people; (every character in the film wears some sort of mask).  Although Emmaline is about isolation, it is also about interconnectedness, a theme of his earlier film, A Song of Thread, a somewhat surreal depiction of the butterfly effect — the theory that one thing causes another, which causes another, and so on.

When he began working on his latest film, Bouchard knew how he wanted it to start and end but wasn’t clear on what would happen in the middle.  Just as with his fiction writing, he often finds himself led by the story.  “It dictates to you how it’s going to go.  I try to make films the same way I write,” Bouchard said.  “Oftentimes, I’m not sure what the film is about until I see the film.”

Emmaline consumed him for four solid months as he tackled everything from sculpting models, creating computer-generated images, and composing and performing his own music.  “It takes a really ridiculous amount of time to produce five seconds of film,” he said.

When he hit a creative block, he would take a break and pursue another activity, such as sculpting, carving, or painting for a day or week, however long it took.  “It’s not a forced thing for me,” he explained.  Unlike other artists who pound and pound until they have a breakthrough, Bouchard waits out the snag, trusting in the ebb and flow of the creative process.

Bouchard learned this trust through his years as an artist, musician, writer, and actor.  “Not to sound cliché, but I always needed to create,” he said.

Aspiring animators should not be discouraged by the fact that they won’t make something as good as Pixar, he said.  “That’s not the point. The point is to make it.”

Bouchard was always interested in making films but knew it wasn’t going to happen in the typical way.  “I am not gregarious enough to audition and cast people,” he said.

When the chance came to dabble in animation — a medium that combines elements of all the artistic disciplines he practiced independently over the years — he seized the opportunity.  His introduction to the art form came from a free online program called Animator.  He downloaded the software and began a two-year process of teaching himself the editing system, which was “formidable,” he said.

With Animator, an Adobe editing system, and a video camera for bluescreen effects, he was in business.

“I’m kind of like God,” he joked.  “I move the models here and there.  Nobody bitches or take lunch breaks.”

Bouchard gained proficiency with the tools by producing several films.  Two years ago, he felt comfortable enough with his progress to show a film at the Northampton Film Festival.

Despite the tedium of numerous revisions, being ruthless with his work has led to improvements.  “I’ve learned the joy of revision,” Bouchard said.

Unlike some other creative types, Bouchard does not share his work with others before it is done.  Rather, filmmaking is a deeply personal engagement that takes place between him and his art.  In the past, when he showed people a work in progress, their feedback sometimes caused him to lose motivation.  “It can take the wind out of my sails,” he admitted.

After finishing an animation, “I remind myself how crazy I am,” he said.  If you watch a film with computer-generated images, the credits can stretch on for up to ten minutes, he said.  “There are teams that just take care of wrinkles in clothes.”

Making Emmaline took hundreds of hours of intense and meticulous work.  Given the time demand of the art form, “you have to be out of your mind to do this,” he said.

That being said, he just finished another short animation.