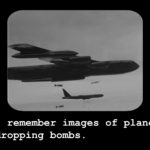 I Covered My Eyes investigates childhood notions of threat and safety by juxtaposing TV news broadcasts of tragic world events with home movie footage. The project was first conceived after seeing the televised images broadcast live on September 11 2001, and wondering what children must be feeling upon witnessing this horrific act within our own borders.

Soon after, director Paul Turano wrote a list of the tragic events he distinctly remembered witnessing on TV as a child in the 1970s and early 1980s. By adopting a child’s perspective, the film evokes his experience of learning about the outside world through news broadcasts, and the accompanying realization of threatened safety from forces outside his immediate family and community. As the sense of vulnerability grows throughout the film from abstract threats to more immediate and actual ones, the seemingly innocent and idyllic world of his childhood becomes overshadowed by an increasing awareness of its fragility and precariousness.

New England Connection: Paul Turano was born and raised in Colchester, CT. He Received a B.A. in 1991 from Hampshire College in Amherst MA, an M.F.A. in 1995 from Massacusetts College of Art. He has lived and worked in Boston from 1993 and currently is an Artist-in-Residence at Emerson College in the Visual and Media Arts Department.

Director(s) Bio:: Paul Turano has independently produced numerous award-wining experimental films over the last 15+ years. His work has been exhibited nationally and abroad at museums, micro-cinemas, alternative venues, colleges and universities and has been shown at festivals throughout North America including the Black Maria, Ann Arbor, Athens International, Hartford International, FLEX FEST Florida Experimental, and the New England Film and Video festivals. His recent digital video "I Covered My Eyes," screened this past summer at the Globians World and Culture Documentary Film Festival in Berlin, Germay and in Australia at the Syndey Underground Film Festival. His films have been shown locally in Boston at the Harvard Film Archive, the Coolidge Corner Theater, the Embassy Theater, and the Museum of Fine Arts. He is the recipient of a Media Fellowship from the Massachusetts Cultural Council and a Moving Image Fund Grant from the LEF Foundation.