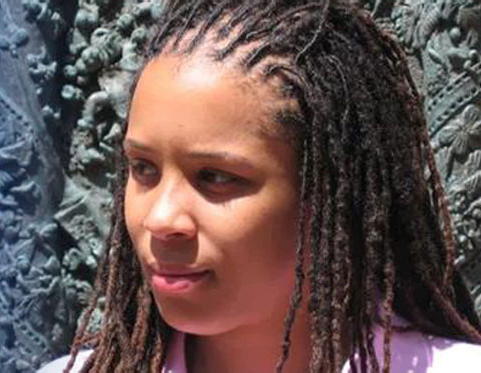 Share
Simmons College graduate Amber Sharp brings her short, Triple Minority, to the Boston Gay and Lesbian Film Festival and her TV pilot, Don’t Go, to the small screen. Both projects forward Sharp’s unique take on sexuality, identity, family, and much more.
I wanted to make a film that would create a positive conversation about homosexuality and religion,” Amber Sharp says about her motivation to write and direct Triple Minority.   “I grew up in a Baptist Southern Church and we never talked about homosexuality, or if we did, it was in a negative way.”  Sharp’s short film combines the personal and the political in its depiction of a family seeking common ground between the parent’s religious beliefs and the daughter’s sexual orientation.

Sharp spent her undergraduate years in Boston at Simmons College as an English and African-American studies major.  “My goal at Simmons was to be a professor and make films on the side.”  As she describes it, she began to write stories and slowly filmmaking moved to the forefront.  She attended the University of Southern California where she made Triple Minority as her graduate thesis film.

Sharp wrote and directed the film and raised the $20,000 needed to produce it.  “I had such a hard time getting started,” she says.  “I had to stop to raise money.  A lot came from my own money and then I wrote letters to family and friends.  I raised a couple of grand that way.”  In fact, Sharp says that the five days of shooting felt like a reward after the hard work of raising money.   “Overall it was a wonderful experience,” the director says.  “I was able to collaborate with such talented people.”

Sharp says she is “laid back” on the set.  “We like organization,” she says, referring to the production team.  “I meet with people and make sure we’re all on the same page.  I let people bring in their stuff.  I like to give people their creative space.”  She is open to improvisation and allowed the actors to rehearse an important scene that takes place at the dinner table without the script.  She liked the way it played so much that she asked the cast to bring their contributions to the finished film.

The main character of the film, Clair, is everything her father wants her to be, except heterosexual.  After a long estrangement, Clair (Ruth Ricks) invites her parents to dinner where they will meet her partner for the first time.  Sharp employs a mixture of flashbacks and present day action to tell the story and illuminate the development of the characters.  The sting of betrayal felt by both father and daughter is evident as well as the pain each feels at the loss of their formerly close relationship.  Sharp’s script does not place blame on either party.  “It’s a message about unconditional love [and] the price we pay for shutting out our loved ones.”

The filmmaker says that audiences understand that message and find that the film transcends the bounds of politics and of a single issue.  “People relate to the fact that every family has something they have to deal with.  Every family has to come to terms with what is happening to them.”

One meaningful encounter for Sharp happened when she was invited to show the film at a college and participate in a discussion after the screening.  “It was an extremely religious school and the Christian organization was going to stop the film from being shown.  The group came in [to the screening] and they…well, you knew they had something to say.  After the film and after I explained why I made the film, a woman came up to me and said, ‘When I came in I was really against it, but now I will make a better decision about how I treat gay people in my life.’  Then she asked me if she could give me a hug.”

Sharp hopes that the film will continue to reach people.  “For young people just coming into their sexuality, if it can help them obtain knowledge or help them in any way possible, that’s what I hope for the film.”

While Triple Minority continues to have a vibrant life on the festival circuit, Sharp has turned her attention to her current project, a TV series called Don’t Go.  “It’s about a group of people who live in a four-plex in LA.  It’s Melrose Place meets The L Word meets 227, the filmmaker says.   Sharp wrote the script and directed the 60-minute pilot episode, which is currently in post-production.  Independent film fans will recognize Nisha Ganatra (Chutney Popcorn) and Guinevere Turner (Go Fish, The L Word) in the cast.

As Sharp describes this project she marvels at the way all the pieces came together.  Just after Sharp had finished the script she attended a function with her partner Seema Gaur, who is also the producer of Don’t Go.  “Nisha Ganatra was there and I told her about the project and that I have this Indian character and maybe you could look at it and if you’re not interested, that’s fine.  She said ok and I sent her the synopsis.  She loved it and then I sent her the script and she said, ‘Of course I will do this.’”

Sharp describes some of the content of the show as “controversial as far as what you see on TV now.”  When asked to elaborate she says, “Well, Guin Turner’s character is a hermaphrodite.  No, that’s not the correct term, it’s ‘intersex.’  She’s dating a very butch partner who she somehow impregnates.”  Sharp says she was driven to show diverse images of gays and lesbians on screen.  “I wanted to show a real spectrum of the community.”

Many of the crew members from Triple Minority returned to work on Don’t Go.  “I would say about 80 percent came back.  It made the production very enjoyable.”  Sharp credits lessons she learned while making Triple Minority with contributing to the smooth production the second time.  “I learned a lot about trusting myself as a director.  I was nervous this time, but I was more nervous the first time.  I felt more confident as a writer and director.  I learned a whole thing about pre-production and working with people.”

Sharp was also freed from the task of major fundraising this time because she and her partner were able to fund it themselves.  “There was something very magical about this project,” she says.   Both producer and director hope that the magic will continue for Don’t Go when it screens at different festivals and makes the rounds of TV networks.

It is not just the magical aspect of filmmaking that appeals to Amber Sharp, however, it’s the authentic connection to the audience.  “For me as a filmmaker, what’s important is to put truth on the screen and then you do with it as you please.”

Triple Minority will be shown on May 18th as part of the Women’s Shorts program in the Boston Gay and Lesbian Film Festival at the Museum of Fine Arts, Boston. For more information: www.mfa.org/calendar. View a trailer at http://www.tripleminoritythemovie.com/movies/trailer02.mov. For more information about Don’t Go: www.dontgotheseries.com/.

Ellen Mills is a film fan and writer. Contact her at Emills941@yahoo.com.

Triple Minority will be shown on May 18th as part of the Women’s Shorts program in the Boston Gay and Lesbian Film Festival at the Museum of Fine Arts, Boston. For more information: www.mfa.org/calendar. View a trailer at http://www.tripleminoritythemovie.com/movies/trailer02.mov. For more information about Don’t Go: www.dontgotheseries.com/. Ellen Mills is a film fan and writer. Contact her at Emills941@yahoo.com.